The airline’s chief executive Craig Kreeger revealed his decision to move forward with the technology at the SITA airline IT summit in Brussels.

“We are still working [on this project] and don’t yet have a definitive date,” he says. “It will be rolled out beyond Heathrow to other check-in facilities. All we’ve done for the moment is look at the data and decide to go ahead.” 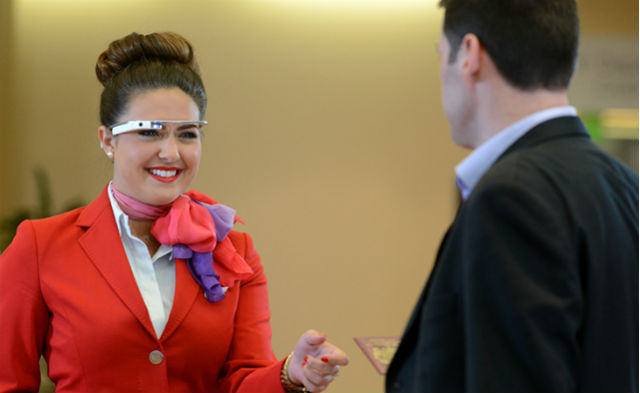 During a trial at Virgin Atlantic’s “Clubhouse” at Terminal 3, check-in staff wore the glasses to find out if they could help improve customer service.

They also trialled smartphones and Sony watches, though neither was deemed successful.

Via the Google Glass technology, staff were automatically presented with passenger information – including names, frequent-flyer status, flight numbers and destinations – as travellers approached the terminal in chauffeur-driven cars.

Kreeger says it took the staff time to get used to wearing the glasses, but that their ability to engage with customers improved as they became more comfortable.

“Some passengers thought it was strange, and a small number were worried it was some kind of invasion of privacy,” he says.

“But when we explained what we were doing most people thought it was cool.”

Kreeger says he feels Virgin Atlantic was the right airline to trial technology like Google Glass as it fits in with the company culture and brand.

He insists the pilot scheme was not a publicity stunt, though he acknowledges that media interest in the story has been excellent.