Virgin Galactic is in talks to purchase a second carrier aircraft for its nascent small satellite air-launch service, to offer greater payload capacity than is possible from the custom-built, twin-fuselage WhiteKnightTwo (WK2), that will also serve its suborbital tourist flights.

Combined with an enlarged fuel tank for its in-development LauncherOne rocket, the new aircraft, described by Virgin Galactic (VG) as “commercial”, will enable a near doubling of payload capacity. The new configuration promises to lift up to 200kg to the 600-800km sun-synchronous orbits popular with Earth observation or scientific missions, or up to 400kg to lower, low-Earth orbits – up from 120kg and 250kg, respectively.

A second aircraft will also enable a “significantly higher” flight rate. The company expects to test-fly LauncherOne before mid-2017.

The launch cost, however, is being held at $10 million, but customers will be able to pay extra for larger payloads and/or higher orbits. Chief executive George Whitesides says it is normal launch industry practice to “hold back some performance”, and adds that the company has more to offer. 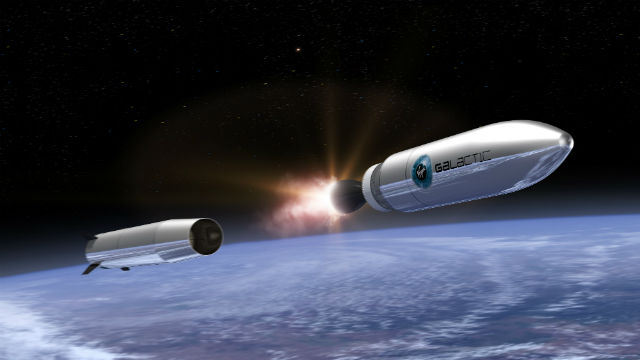 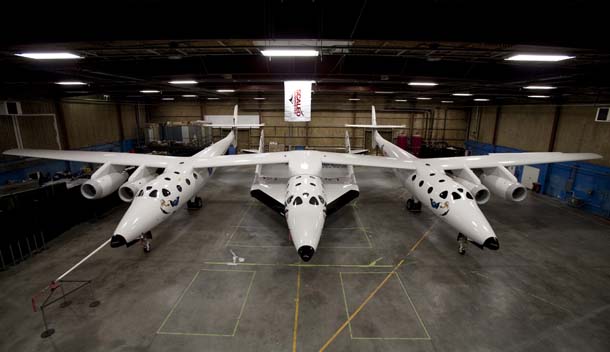 Whitesides declined to say what sort of aircraft Virgin Galactic is trying to buy, but said the Scaled Composites-built WK2 was a limiting factor in payload capacity. WK2 is designed to carry the six-passenger SpaceShipTwo or the LauncherOne rocket to about 50,000ft, suspended between its twin fuselages. However, the new aircraft need not be of a similar design. Orbital ATKs’ three-stage Pegasus rocket – big enough to orbit some 600kg – is carried aloft for air-launch underneath the body of a modified Lockheed L-1011. 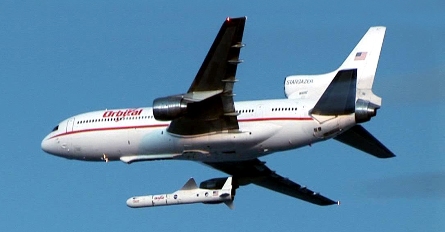 Enlarging the rocket’s fuel tank is an obvious performance booster. But Virgin Galactic clearly has other technical cards to play. When Flight International visited the company’s new engineering and manufacturing centre in Long Beach, California in May 2015, special projects vice president Will Pomerantz described LauncherOne’s two-stage oxygen-kerosene Newton engine as tried-and-tested technology. The company, he says, wants to “walk before it runs” with more exotic motors.

And, while achieving first flight and reliable operations with Newton will be no small feat, Virgin Galactic has lined up a formidable engineering team. By May, when the Long Beach site was still an empty, 14,000m²/150,000ft² manufacturing and test floor with a design loft above, a team of 80 engineers – representing, as Pomerantz put it, expertise from every US rocket type – was at work devising the rocket from “tip to tail”. Now that crew is up to 150.

Whitesides describes them as “great people” and a “good core team”. He stresses that the engineering challenge now is to integrate design and manufacturing to avoid re-designs to accommodate production.

In any case, Virgin Galactic is not short of talent. Long Beach has a long history of aerospace manufacture, and from VG’s new site it is just about possible to see Boeing’s C-17 assembly plant, which is closing for good following delivery of the last of the huge military transports.

A VG jobs fair earlier this year offering 100 manufacturing positions attracted more than 6,000 visitors. Some workers from the C-17 operation have already joined the rocket operation, and Whitesides describes the technicians and manufacturing people as extremely skilled.

Ultimately, everybody attached to the LauncherOne operation could be very busy. The business plan calls for a broad base of customers looking for a quick and adaptable launch service, but the first and only firm customer to date is a big one. Arguably the most ambitious programme in commercial spaceflight, OneWeb, has signed up VG to help it orbit 900 small communications satellites, starting in 2017, to provide broadband internet to any corner of the world not reachable by cable.

The bulk of those launches will be by heavy Soyuz rockets flown by Arianespace and loaded with up to 36 of the 150kg satellites each, but LauncherOne is a critical part of the equation. With 39 flights contracted so far, OneWeb will rely on VG to fill gaps in the constellation. To that end, the speed of response possible with an air-launch is critical; a faulty unit could need replacing within 24h to maintain service.