Virgin Galactic’s bid to enter the small satellite launch business is building momentum on two fronts, with heavy work now under way in Texas on modifications to the 747-400 that will serve as a dedicated air-launch carrier while colleagues in California work to increase the payload capacity of the in-development booster rocket, LauncherOne.

Speaking today at the Royal Aeronautical Society in London, VG’s executive vice president of spaceport and programme development, Jonathan Firth, revealed the former-Virgin Atlantic 747, acquired in December by the launch operation, is now in Waco undergoing a D-check and will be transferred to San Antonio for modification as a carrier aircraft.

The modification, he said, will be finished this year. Work at San Antonio will in part be determined by aerial work to test the flight profile needed for air launch operations, but is not on the overall programme critical path. The rocket – an in-house liquid oxygen-kerosene design being advanced at VG’s engineering and manufacturing centre, established last year in Long Beach – is due for flight testing in 2017.

LauncherOne and its “Newton” engine are being uprated to enable Virgin Galactic to put satellites of up 300kg into Sun-synchronous polar orbits, or of up to 400-450kg into equatorial orbits. The original plan had called for LauncherOne to share the twin-fuselage WhiteKnightTwo carrier aircraft built for the company’s suborbital tourism vehicle, SpaceShipTwo, but market signals that payloads needed to be bigger called for a bigger carrier; hence the 747.

The payload plan has grown dramatically. The programme was revealed at the 2012 Farnborough air show as a scheme to lift up to 225kg to a low-inclination, low Earth orbit or 120kg to a high-altitude Sun-synchronous orbit for a flight price of $10 million. As late as spring 2015, the masses hadn’t changed, but by September, when VG revealed it was shopping for dedicated carrier aircraft, the company said it would nearly double capacity, to up to 200kg to the 600-800km sun-synchronous orbits popular with Earth observation or scientific missions, or up to 400kg to lower, low-Earth orbits.

The $10 million price target isn’t changing, but now even those mass parameters are being stretched. Says Firth: “The market told us that’s not a big enough vehicle”.

VG is contracted to 39 flights – and 100 options – for UK-based OneWeb, which plans to orbit 900 Airbus Defence & Space-built microsatellites of less than 150kg (331lb) each, to provide affordable broadband internet to rural areas around the world from 2019.

Firth says launches to polar orbits could be done from about 50 miles (80km) off the US west coast, and to equatorial orbits from the same distance off the east coast.

In time-tested Virgin fashion, the new carrier aircraft is also getting a memorable name: "Cosmic Girl". 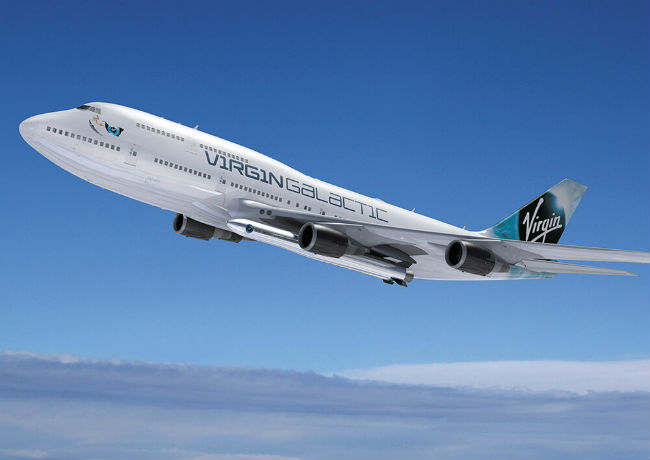