Vought Aircraft Industries has produced two aft fuselage sections for the first Boeing 787, marking another step in the assembly process for the aircraft.

The completed pieces – sections 47 and 48 – will be transported 200 yards to the Global Aeronautica facility, a joint venture by Vought and Alenia North America in Charleston, South Carolina. The completed fuselage section will be then be wrapped and delivered to Boeing’s 787 assembly centre in Everett, Washington.

Vought’s two sections comprise 23% of the fuselage structure, with section 47 measuring 23-feet long and section 48 extending 15 feet. It has been building the two pieces since its production facility opened last June. In total, it has built seven production sections and one developmental section during that period.

Boeing plans to unveil the Boeing 787 factory on 21 May, followed by the ceremonial roll-out of the first aircraft on July 8. 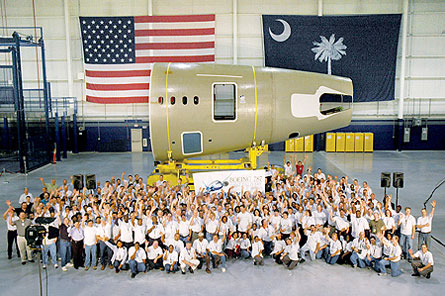 Everything about the Boeing 787