The operator of Ronald Reagan Washington National airport has reached an agreement with airlines to invest about $1 billion in the airport over the next decade.

The capital programme includes a new regional concourse connected to the north pier, connecting the three terminal B/C piers inside security by relocating security checkpoints to level three from level two, a new car park and planning for renovations of terminal A, says Margaret McKeough, chief operating officer of the Metropolitan Washington Airports Authority (MWAA), at a board meeting today.

The programme is part of the new 10-year use and lease agreement that the operator has reached with airlines and will enter into force on 1 January 2015.

“[We will] basically modify our existing facilities to be able to accommodate the current level of passenger activities that we are seeing here today and we are forecasting to see from the recent slot divestiture changes,” she says.

Passenger traffic at Washington National was roughly flat at 15.5 million year-to-date in September, MWAA data shows. However, the operator expects an additional 2 million passengers for about 22 million in 2015 due to the recent changes in airline slot holdings.

American Airlines divested 43 slot pairs to JetBlue Airways, Southwest Airlines and Virgin America earlier this year under a deal with the US Department of Justice for approval of its merger with US Airways in 2013.

As a result of the slot deal, the Fort Worth, Texas-based carrier discontinued a number of flights that were mostly operated by 50-seat regional jet aircraft from Washington National. JetBlue, Southwest and Virgin America have replaced those flights with ones operated by aircraft with at least 100 seats, a shift that is expected to drive much of the growth in passenger numbers.

American stands to benefit the most from the capital plan. The new regional concourse would convert all 14 of the remote parking positions used by the carrier’s feeder operations into a concourse directly connected to the north pier, says McKeough. This would replace the bussing operation currently in use.

Flightglobal first reported plans for the new concourse in June. 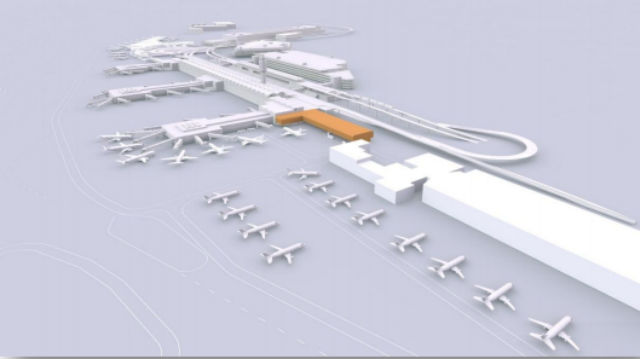 In addition, the new secure area connecting the three piers in terminal B/C would facilitate connections between American’s flights. The carrier uses the majority of the centre and north pier for its hub operations with buses running between them for transit passengers.

MWAA plans to achieve this by closing the outdoor open terraces on the north and south ends of Level three and moving the separate security checkpoints at the entrance to each pier into new locations in the space, says McKeough. The "National Hall" on Level two would be incorporated into the secure area.

“What we achieve there is the ability for passengers to connect from either the north, south or centre pier very freely without having to go through security twice or be bussed,” she says.

Asked whether American will contribute any funds to the projects, McKeough tells Flightglobal that MWAA is still developing a “prudent” financing plan but that they intend to finance the capital plan themselves as they own the facilities.

“But clearly, American will see an increase in costs,” she says. She cites the new use and lease agreement that includes an increase in airlines’ share of debt service coverage to 35% from 25% to help pay for the capital programme.

MWAA also intends to increase passenger facility charges (PFCs) to $4.50 per passenger, which is the maximum under US Federal Aviation Administration regulations, to help fund the works at Washington National.

Executives at the carrier have repeatedly expressed a need for both a secure connection between the centre and north piers, as well as a regional facility, at Washington National.

Ricondo & Associates will work with MWAA as its architectural, engineering and planning services adviser for up to three years on the capital programme.

The new use and lease agreement will also allow MWAA to improve balance between its two airports. This includes the ability to use up to $300 million in revenues at Washington National to reduce debt service at Washington Dulles International airport.

MWAA and airlines also agreed to a provision to protect Dulles if any new beyond-perimeter slots at National are created. The operator can shift an additional $1.5 million in revenue at the close-in airport towards paying debt service at the international facility per slot pair created by the US government.

Flights from Washington National are limited by a 2,012km (1,250 mile) perimeter, however Congress has created a number of beyond-perimeter exemptions at the airport during the past 15 years. Prior to this, all flights beyond the perimeter operated from Dulles or nearby Baltimore/Washington International airport.

“We’re pleased that together we have recognised that this is a two-airport system and we need the flexibility to manage it as a system,” says McKeough.