Airline ticket refund site ChangeYourFlight, an Airbus A380 advertising campaign and mobile app Smart BRIEF CABIN have outfought rivals to be numbered among the winners of the Flightglobal Webbies 2011.

The Webbies, now in its fourth year, celebrates the best and brightest in aviation websites and social media activities – and this time includes new and improved categories.

We asked flightglobal.com users to enter or nominate their favourite websites in these categories: best mobile app, a very timely category as people become more dependent on mobile devices and companies realise the potential of apps for product awareness; advertising campaign of the year; best blog; best use of social media; and, of course, best website.

The judging panel had some tough choices to find the top three in each category from a flood of quality entries.

Here are the winners...

ChangeYourFlight has been held to reign supreme in this category by judges Michael Targett, head of web, Flightglobal (@fg-editor on Twitter) and Ludo Van Voren, chief executive, Aerospace eBusiness (@ludozone). 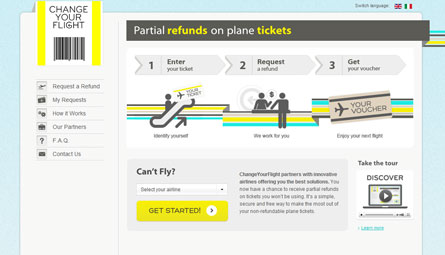 Van Voren says: “When I opened this site, I knew immediately that I was looking at the winner for this year. To me, I look for a new idea, well executed, with a potential to make a real difference in the industry. What a great concept! It is simple to use for all parties and is the ultimate definition of the win-win scenario.”

Targett hails the website as “a terrific concept that has a very neat user interface and design”, adding: “Its ease of use is well demonstrated by the cool video tour. It’s a genuine web innovation for the travel industry and represents a novel solution to any beleaguered would-be traveller. If ChangeYourFlight succeeds in partnering with more airlines it has the potential to become the eBay of the airline ticket world.”

Design Your Own Boeing 787 Dreamliner takes second place. This element of Boeing’s New Airplane website was an original initiative from the manufacturer to engage the general public in the commercial launch of the 787, says Van Voren: “Technically impeccable, the application allowed people to be very creative in their design and generated tonnes of free press coverage for Boeing. The app had all the right elements – including the ability to save your design and share it on social media platforms.”

He expresses disappointment, however, that Boeing did not run a voted-for awards contest to highlight the best entries amongst the 7,000-plus submissions.

Targett applauds Boeing for “a lovely example of how to execute an interactive promotional campaign for a new product. Fun and easy to use, the app is slick and allows visitors to share their creations with others, although Boeing could’ve gone further with this aspect of the site.”

Third place is taken by Airliners.net, which began as an aircraft spotter’s website and has developed into a strong community of aviation enthusiasts. “The website technology itself is a bit dated and lacks the look and feel of a modern website, yet the information gathered by this community is always interesting and often on the edge of news,” says Van Voren. “Time after time, the specialised press or even mainstream press will use pictures from and references to this site in their coverage of aviation breaking news. This is a fantastic example of crowdsourcing.”

Targett’s verdict: “Airliners.net’s competitive position cannot be challenged. For years it’s been the leading forum and community site for all types of visitors interested in sharing gossip, photos and views on happenings in the air transport industry.

“Packed full of content and attracting a vibrant active audience, airliners.net remains a big hitter in the online space for aviation and aerospace sites. The one negative is that the site has not really moved on in the last few years and is essentially the same proposition it was when acquired by Demand Media in 2009.”

In the Webbies’ newest category, Smart BRIEF CABIN has been named the victor by judges Henk Ombelet, Flightglobal’s head of product development, and Sergio Mello, founder and chief executive of SATISFLY. 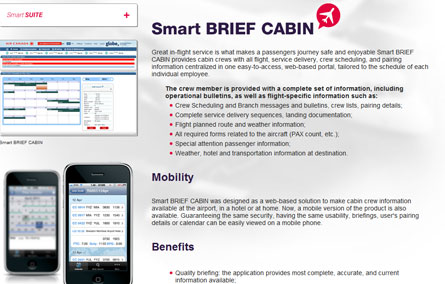 The judges are impressed with the breadth of functionality provided by this app, available on iPhone, BlackBerry and Android. They acknowledge that feedback from crew had been very positive and take-up very fast as “Smart Brief Cabin takes access to cabin crew management systems to a new level”.

In second place comes PC-12 Digital Airplane Flight Manual. This app, provided by Pilatus for free, appears to make the flight-planning job “a lot easier”. In the judges’ words: “It has a visually attractive design, coupled with appropriate functionality which allows owners and pilots to plan their flight almost effortlessly, and lets prospective customers see and test the capabilities of the aircraft. It is a great step to making EFB available to general aviation.”

The judges have put Upcast Jetbook in third place. It is, they say, “a visually stunning app with high quality photos and video that allows the user to compare the specifications of 55 different business jets side by side”.

The AIRBUS LOVE A380, “love at first flight” campaign was judged a winner by Fiona Benharoosh, head of marketing at Flightglobal Ascend, and Haldane Dodd, head of communications at the Air Transport Action Group.

They agree that this campaign is visually striking, with a “use of bold colours and bold typography” which they say “portrayed clear, concise brand messaging”.

Of those nominated, this campaign was remembered most strongly by the judges – a testimony to its effectiveness. “The campaign demonstrated an innovative use of cross-media platforms at air shows, in print, online and using social media,” say the judges. “Impressively, the campaign pulled travellers into a website effectively – to have 5,000 people take the time to make comments on a website is hard work.

“Also impressive is the way that the project garnered positive feedback and stories from the travelling public, which is not easy – most consumers are happy to proactively complain about things, but rarely proactively praise.”

They note the campaign’s smart use of passenger feedback in subsequent adverts to create a persuasive sense of credibility. “Passenger testimonials are more powerful and compelling than anything the manufacturer says itself; therefore [Airbus] was able to explain to airlines how customers felt about the flying experience on an A380, in customers’ own words.

“Surely, it is a useful sales tool for airlines thinking of purchasing. The campaign helped create a sense of emotion around the aircraft and continued the Airbus campaign to make the A380 a flying experience, more than just a new aircraft.”

In second place comes Bombardier’s 25th anniversary. The judges label this campaign “a very engaging way of making the history of Bombardier Aerospace very personal and a smart use of user-generated content”.

They say: “Not only was the external messaging pulled off well, but it was a good way to build staff morale and make them an integral part of the company’s success. It was successfully built and engaged with a global community, and provides a platform for a powerful communication tool.

“It had very good results in building presence on Facebook with the interested public and it demonstrates an innovative way for a company to launch its social media presence.”

And a cross-media campaign for Avios, formerly Airmiles, comes third because it “demonstrated aspirational messaging resonating with the target audience, looking for more, for less, in challenging economic times”.

The judges say: “The clever use of visuals, clean and crisp, endorses the key messages of the campaign.” Here is an effective way of “building a brand from scratch, using emotive TV and online adverts to build association with its previous brand name”, they add. “The associated public relations meant that, while there were some critics of the change, it would have been hard for members of Airmiles not to know that the programme was changing – surely this was the key challenge for the brand and the emotive television advertising helped deliver this.” 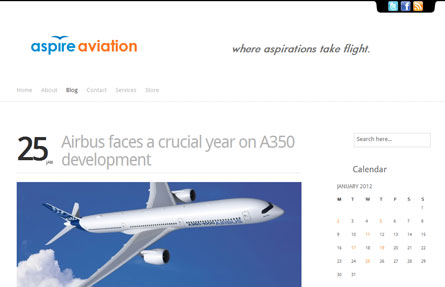 The judges say the prize-winner has “produced a number of stories that demonstrate a depth of industry understanding, delving into comprehensive industry analyses”, adding: “The site has thorough articles, and Aspire also produces in-depth reports that illuminate key insights about the goings on at the world’s largest aircraft makers.

“The success of Aspire’s content can be seen in the high number of reader comments and social media interaction with its timely content, which contains numerous scoops.

In second place: David Parker Brown’s Airline Reporter. The judges feel this blog is representative of what’s best about aviation blogging on the internet: “From trip reports to breaking news, Brown captures his enthusiasm and passion for aviation, taking his readers along for the ride. The Airline Reporter brand is synonymous with the community’s passion for aviation. Every post, every tweet is done with the same infectious energy that permeates the internet’s AvGeekdom.”

Latedeparture.com lands third place for transporting readers “inside and outside of the quirky, interesting and unique facets of airports, billing itself as ‘things to do when your flight is delayed’. The site’s content ranges from airport concepts, aircraft refuelling and exploring how QR codes have changed the travelling experience. Along with its unique look and feel, Latedeparture.com has the top quality content to match.”

BEST USE OF SOCIAL MEDIA

In pole position for this category is Scandinavian Airlines’ with its crowdsourcing efforts for allowing customers to select a new summer destination from Oslo. Social media aficionado and ex Runway Girl Mary Kirby, was the sole judge for this category and she deemed the airline the worthy winner for potentially changing the way network planners do their jobs going forward. 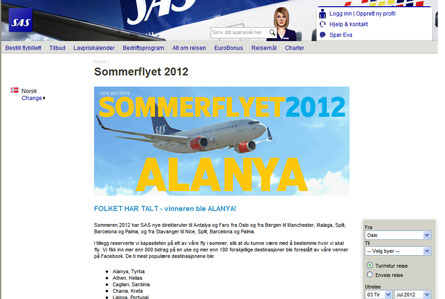 She said: “It will provide verifiable evidence that one can drive significant return-on-investment (ROI) with minimal social media investment - a measure that has been somewhat illusive to this point.

Ranked second and making its second appearance in this year's Webbies was Boeing for its Design your own Dreamliner campaign. She asked:  “How do you generate approximately $1 million in free media and generate huge talkability about your product?” and said that Boeing’s programme achieved viral status by capturing the imagination of aviation enthusiasts around the world, which “underscores the huge marketing potential of well-conceived social media strategies.”

And in third place a social media loyalty programme by Estonia Air. Kirby said: “When you’re a small airline, it’s not always easy to have your voice heard or get your name recognised. But that’s what Estonian Air achieved in launching the world’s first social media loyalty programme. Eyes are now on Estonian to see if its initiative will pave the way for fresh thinking in the quickly-evolving travel distribution space.”