The military head of the US Air Force has warned that the cost of not modernising front-line combat aviation forces “will be measured in terms of lives lost of friendly forces”.

Speaking at a press event during a trilateral air combat exercise with French and British forces at Langley AFB in Virginia, Gen Mark Welsh says the last 15 year of air warfare in the Middle East have not been sufficiently challenging to drive military modernisation politically and monetarily, but meanwhile advanced, overlapping counter-air systems continue to proliferate globally.

“Unfortunately, there’s nothing operationally today that’s driving that modernisation,” he says. “Air forces that fall behind the technology curve will fail. We can’t let that happen.”

His comments come the US government looks high and low for budget savings, with big-ticket aircraft programmes like the Lockheed Martin F-35 and Long-Range Strike Bomber (LRS-B) potentially facing quantity or funding reductions. Smaller new programmes like the JSTARS recapitalisation are also at risk if Congress reins in defence spending, particularly in the 2020s when current development projects enter full-rate production.

A new report by the Congressional Research Service highlights the challenge, suggesting that cutting the planned annual purchase of F-35s could be one solution, slowing the replacement of ageing and war-weary A-10s and F-16s. Alternatives include deferring the next tanker buy, known as KC-Y, or moving the LRS-B programme to a separate account for national-level projects.

USAF prefers the latter proposal, but is also determined to retire outdated but popular aircraft like the Fairchild Republic A-10 and Lockheed U-2. 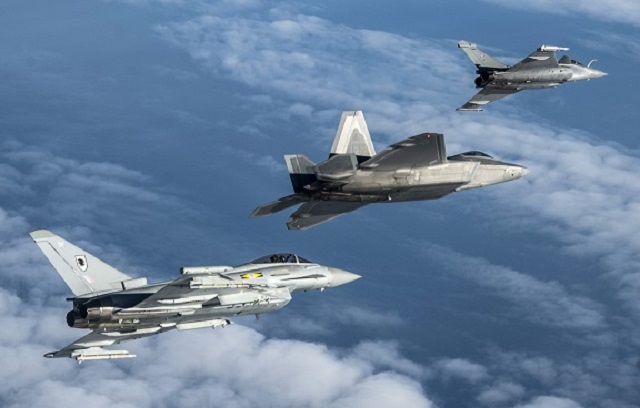 The Eurofighter Typhoon, Lockheed Martin F-22 and Dassault Rafale are considered the premier fighters of the British, US and French air forces.

“As the threat increases, if your capability against it does not become more and more technologically advanced, then you will lose more lives if you’re faced with that threat,” Welsh says. “The enemy is not resting, and we can’t afford to.”

“This is a challenge facing all air forces,” says RAF Air Chief Marshal Sir Andrew Pulford. “It’s about maintaining the technical edge, and hence the investment in F-35.”

“We have to maintain a balance of capability, capacity and readiness,” he says. “The price of systems has prohibited us from buying all high-end equipment over time, and quantity does have a quality all of its own.”

Pulford says RAF is smaller now than at any point, but also “at its most potent”. The UK government intends to resource two additional Typhoon squadrons and an another F-35 Lightning II squadron above previous force plans, he says.