Canadian carrier West Wind Aviation has temporarily grounded its remaining ATR fleet after the crash of an ATR 42-300 as it departed on a domestic service.

Investigators probing the crash have sent the cockpit-voice and flight-data recorders to an analysis laboratory in Ottawa.

All 22 passengers and three crew members survived the accident – although several occupants sustained serious injuries – after the aircraft descended into trees and struck the ground shortly after taking off from Fond-du-Lac airport on 13 December.

Transportation Safety Board of Canada says the turboprop (C-GWEA) carved an 800m (2,600ft) wreckage path as it came down. The aircraft was badly damaged.

It came to rest upright but "tilted steeply" to its right side, says the investigation board, with the left side having appeared to suffer the worst damage. The fuselage "ruptured", it adds, around the third row of seats.

West Wind, which is based at Saskatoon, has grounded its other ATRs "for the time being", says the inquiry. 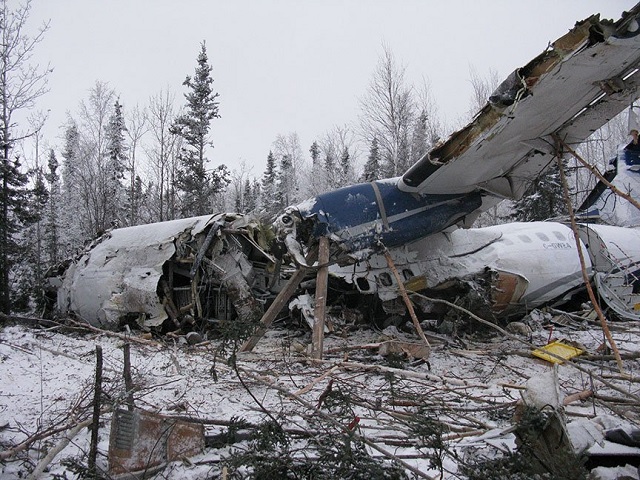 As well as the two flight recorders the probe has retrieved the emergency locator transmitter and carried out an initial survey of the crash site.

Engine manufacturer Pratt & Whitney Canada, along with ATR and French investigation authority BEA, is participating in the inquiry.

While freezing meteorological conditions prevailed at the time, investigators have not disclosed whether the aircraft had been de-iced, or indicated whether external conditions contributed in any way to the crash.

Nor has the probe given any details of the configuration during take-off or the flight profile. Analysis of weather and surveillance data, as well as maintenance records, will form part of the inquiry.

Flight Fleets Analyzer lists C-GWEA as a 26-year old airframe originally delivered to Mexican carrier Aviacion del Noroeste, and serving with operators including Africa's Fly540, before being transferred to West Wind in 2012.