Boeing’s HH-47 Chinook is believed to have won the $10 billion, 141-aircraft CSAR-X combat search-and-rescue competition because the helicopter offered much of the capability the US Air Force was looking for “out of the box”. 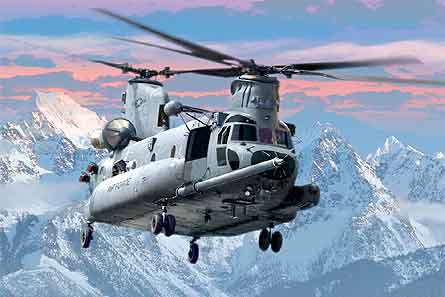 The competing Lockheed Martin US101 and Sikorsky HH-92 would both have required significant development work to get to the initial Block 0 capability required by the USAF – and more to get to the definitive Block 10 configuration.

Boeing argued during the competition that its HH-47 – based on the MH-47G special-operations Chinook already in service with the US Army – was “Block 0+” because it already had some of the capabilities called for in Block 10, most particularly the multi-mode terrain-following/terrain-avoidance (TF/TA) radar.

The manufacturer argued that clearance of the TF/TA radar – required for covert ingress and egress at low level – would be an expensive and time-consuming process for the competing bidders. Lockheed, however, pointed out that it, and not Boeing, was in fact the company that cleared the TF/TA radar on the MH-47.

But the fact remains the existing MH-47G met a significant number of the USAF’s CSAR-X requirements. Changes required to meet the Block 0 specification include: digital automatic flight controls, which are already fitted to the CH-47F; rotor de-ice, with a heated blade design available from the CH-46E; wirestrike protection; enhanced health and usage monitoring system; dual rescue hoist; and environmentally controlled patient treatment area. The biggest structural change will be a larger, 1.22m (48in)-wide side door. The in-flight refuelling probe required for CSAR-X is already installed on the MH-47G.

Block 10 will require more substantial changes, although the TF/TA radar will already be in the Block 0 HH-47. Increased performance demands will require a rotor system upgade, using an improved blade with swept tips. Cockpit airbags, helmet-mounted displays and wireless intercom will be added, as will be air-to-air and air-to-ground missiles. New JTRS radios and FAB-T satcom will be added, and the Block 10 HH-47 will have increased protection in the form of passive wire detection and avoidance, stand-off chemical/biological detectors, ballistic projectile approach and warning and optical countermeasures.

With the HH-47, the USAF will get a massive increase in capability over its ageing Sikorsky HH-60G Pave Hawk CSAR helicopters. Boeing says the HH-47 will be able to carry a 3,860kg (8,500lb) payload over a radius of more than 555km (300nm), exceeding the USAF’s threshold requirements for Block 0. With full crew and weapons, the HH-47 will be able to pick up two downed crewmembers at 555km radius, compared with around 360km for the HH-60G, says Boeing

Perhaps the biggest hurdle Boeing faced during the competition was to convince the US Air Force that it could meet the requirements for air transport for the HH-47. Fitting a CH-47D into a Boeing C-17 or a Lockheed C-5 is a time-consuming task: not only the rotors but also the pylons have to be removed and re-installed. During the competition, Boeing demonstrated it could reduce the disassembly time from 5h 30min to 1h 36min and assembly time from 9h 45min to 2h 58min – meeting the CSAR-X threshold requirement of 3h for each task.

For the losers, the question is now where next? Lockheed is already under contract to develop the VH-71A version of the US101 for the 23-aircraft US Presidential helicopter fleet, with the first test aircraft scheduled to fly at AgustaWestland early next year. Sikorsky is developing the MH-92 military version of its S-92 for the Canadian Forces, but was counting on the CSAR-X competition to break into the US market after losing the $7 billion VXX programme to the US101.

The next potential competition is the US Air Force’s 66-aircraft Common Vertical Lift Support Platform (CVLSP) medium-lift programme, which was envisaged as a less-complex version of the chosen CSAR-X. But with a helicopter as large as the heavylift Chinook having been selected, this could turn into a new competition. Sikorsky is likely to offer the H-92 again for CVLSP, and Lockheed the US101, but new competitors could enter, including the AgustaWestland AW139/149.