One year after Airbus called for emergency talks with its launch customers for the A400M tactical transport to address what it described as a "huge financial burden" afflicting the company, the parties appear to be on track to sign a revised contract before the end of 2018.

Announcing the development on 7 February, after signing a declaration of intent with Belgium, France, Germany, Luxembourg, Spain, Turkey and the UK via Europe's OCCAR defence procurement agency, Airbus says the measure "provides a new baseline on which to evaluate the A400M contract". 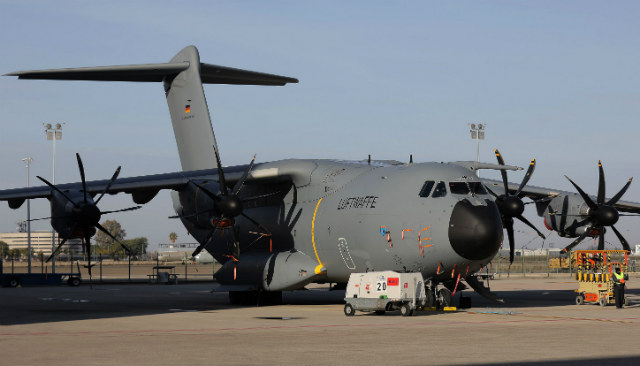 The parties have agreed to work on "a number of contractual elements, including a revamped delivery plan, as well as a roadmap for the development and completion of military capabilities", Airbus says. Once agreed later this year, this "mutually-binding contract amendment" should "mitigate risks and ensure the future of the programme", it adds.

"Since its inception in 2003, this programme has suffered not only from a number of operational issues but, more importantly, under a flawed contractual set-up and insufficient budget which resulted in significant losses for Airbus," notes Tom Enders, the airframer's chief executive. "We have a good chance to at least reduce the bleeding now and deliver the capabilities our customers need" following the new declaration, he adds.

Enders last year referred to the company's signature of a combined development and production contract for the A400M as an "original sin", and labelled a subsequent revision in 2009 – which left it liable for liquidated damages in the event of programme delays – "an incredible blunder".

Referring to a "productive meeting with industry," OCCAR says the declaration of intent will "re-baseline the A400M programme, reflecting the latest status of the production and capability delivery plans."

Airbus and OCCAR decline to provide details of potential changes to be contained within the future contract revision, pointing to "ongoing confidential discussions".

Meanwhile, Airbus indicates that its financial pain on the A400M continued during the latter part of last year. "An increase to the loss-making contract provision on the programme is under assessment for the full year 2017 results," it says. More information is to be released on 17 February. The company reported a total liability worth more than €2.2 billion ($2.7 billion) against the military project through 2016.

Flight Fleets Analyzer records Airbus Defence & Space as having so far delivered a combined 54 A400Ms to the air forces of France, Germany, Spain, Turkey and the UK, plus four to export customer Malaysia. The company's total order book for the Atlas remains at 179 units.