Deliveries of the A400M will take off at pace from later this month, with Airbus expecting to deliver another 10 of the type to France, Germany, Turkey and the UK by year-end. 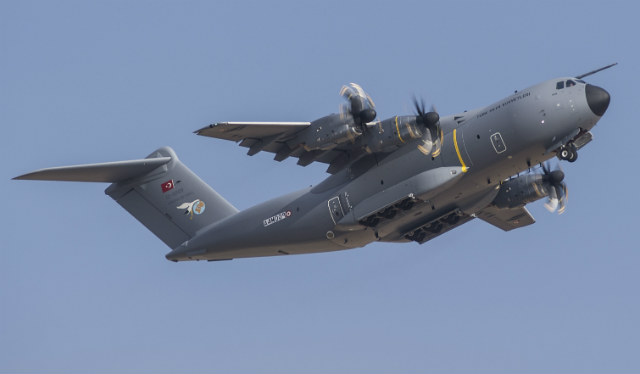 Three production aircraft have been delivered so far: two to France and one to Turkey, with only the latter having been transferred in 2014. The next French example – MSN10 – is now in the final acceptance process in Seville, Spain, closely followed by the nation’s next two examples. A second Turkish aircraft, MSN13, should then be accepted in July or August.

September should see the delivery of the first two aircraft to the UK, with the former of these, MSN15, to also be the lead example delivered with initial tactical capabilities, including basic cargo airdrop. By the middle of next year the same new production standard will be expanded to allow full aerial delivery clearance, the installation of defensive aids system equipment and the ability to receive fuel in-flight.

In all, the UK Royal Air Force will receive four of its eventual 22 airlifters this year, with Germany also to get its first example in November.

Speaking at the company’s San Pablo final assembly site near Seville, Spain, Airbus Defence & Space head of the A400M programme, Rafael Tentor, says the airframer is on track to meet its delivery goal this year, and to hand over 23 of the aircraft in 2015.

“The entry into service has been really smooth,” Tentor says of initial logistic transport tasks performed by the French and Turkish air forces. This has involved the former operator deploying its aircraft to locations including French Guiana and Mali. “We have a solid, reliable platform with the flight performance that we promised,” he adds.

With new export sales of the A400M now being sought, Airbus officials say the company has received requests for information and requests for proposals from "eight or nine" nations. Recent demonstrations have been performed for Kazakhstan and Mexico, while the type was also demonstrated to the air forces of Saudi Arabia and the United Arab Emirates late last year.

Meanwhile, the company’s fleet of Grizzly aircraft has cleared about 90% of the programme’s development and flight test activities, Tentor says, with more than 6,500h accumulated in almost 2,300 flights.