Amid the coronavirus downturn, an increasing number of aerospace manufacturers and suppliers are shifting to the production of medical products that hospitals need to treat growing numbers of seriously ill coronavirus patients.

At first, just a few major aerospace companies announced they had taken up healthcare manufacturing efforts. But in recent days, suppliers farther down the chain have shifted to producing medical components for ventilators and face shields.

Through those efforts, which are getting underway as the pandemic rages in the USA and Europe, companies are trying to fulfill needs of local doctors, nurses and hospitals.

Staff at that facility are collaborating on the project, which aims to make about 650 valves weekly, with other local companies and the island’s Nobel’s Hospital, US-based Triumph says on 7 April.

“When the Charlotte Valve is attached to a snorkeling mask and a wall-mounted oxygen distributor, it creates makeshift ventilator mask,” says the company.

Isle of Man has 158 confirmed coronavirus cases, and a population of almost 80,000 people, says the government’s website. 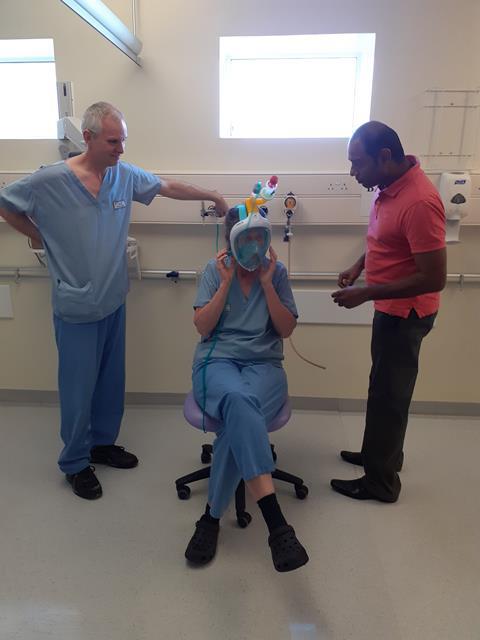 A health care worker on Isle of Man dons a ventilator fashioned from a full-face snorkel mask equipped with a “Charlotte Valve” produced by the local facility of Triumph Group.

Additionally, staff at Triumph’s Georgia and Arkansas aftermarket businesses are helping produce “nonmedical fabric masks” used to help stop the spread of the virus. Other US Triumph sites will produce up to 1,000 face shields weekly, the company says.

Meanwhile the healthcare division of CAE, a Canadian company largely known for training pilots and building flight simulators, has designed a “simple, maintainable, easy-to-manufacturer ventilator”. CAE aims to produce thousands of the ventilators at its Montreal site after receiving government approval, that company says on 6 April.

South African state-owned aerospace and defence company Denel is contributing to a collaboration aimed at designing and producing locally-made ventilators, that company says on 5 April.

Another South African defence company called Paramount Group, which makes the Mwari light attack aircraft and other products, has started producing a transparent box that fits over the head and chest of coronavirus patients.

The company aims to make some 500 intubox for hospitals in the South African province of Gauteng, including Charlotte Maxeke Johannesburg Academic Hospital, it says.

Savannah-based business jet maker Gulfstream has teamed with two other General Dynamic subsidiaries to 3-D print “adapters” that can turn positive airway pressure machines (devices known as CPAPs and BiPAPs) into ventilators. That effort is part of a clinical trial in Canada.

The aerospace companies intend by the end of April to ship components needed to produce 5,000 respirators, Embraer says. 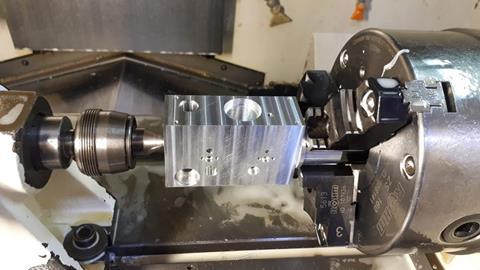 A respirator component being produced on 31 March by Embraer at its Sao Jose dos Campos site.

Companies in the consortium have received an order from the UK government for more than 10,000 ventilators, according to the consortium’s webpage.

Airbus and Boeing are also manufacturing frames for face shields needed by medical workers. Airbus is performing the work in coronavirus-ravaged Spain using some 20 3-D printers, with support from sites in Germany. The European airframer says some US staffers in Alabama and Kansas are also undertaking similar efforts.

Boeing says intends to make thousands of frames weekly, “followed by subsequent production increases”. It will use 3-D printers at sites in St Louis, El Segundo, Mesa, Huntsville and Philadelphia.

Airbus and Boeing say that healthcare work has continued despite broader facility shutdowns.

The companies are also deploying aircraft on coronavirus-relief missions. Boeing has made its 747-based Dreamlifter transport available to move supplies, and since mid-March Airbus has operated three missions to bring critical medical supplies from China to Europe. 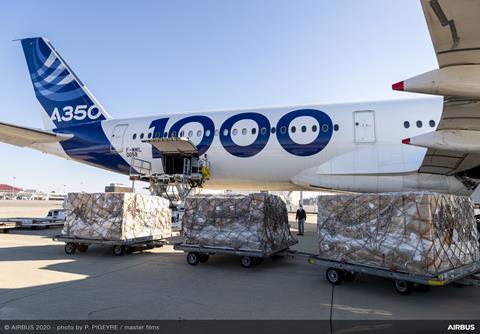 Workers prepare to load shipments of face masks onto an Airbus A350-1000 at the Chinese city of Tianjin in early April.