Airbus, Air France and French air navigation services provider DSNA have carried out their inaugural demonstration flight today under an initiative aimed at evaluating technical and operational innovations to operate the most energy efficient flights.

The flight took place from Paris to Toulouse Blagnac airport, coinciding with the first day of the Airbus Summit being held in the southern French city and focusing on sustainability in aerospace. 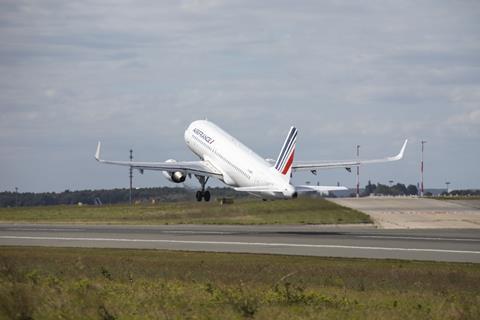 Airbus, Air France and DSNA launched their maiden flight under the Albatross project on 21 September

It marks the first of a series of trial flights planned during 2021 and 2022 within the framework of the Single European Sky ATM Research Joint Undertaking “Albatross” project. The latter is a large-scale initiative of major European aviation stakeholders led by Airbus aiming to demonstrate the feasibility of implementing energy efficient flights in the short term.

The live trials will involve around 1,000 demonstrations flights and first results are expected to be available in 2022.

Speaking at the Airbus Summit, Air France senior vice-president for flight operations Laurent Lafontan said the flight saved about 5% of the carbon emissions utilising all of the elements of this co-operation compared with a normal flight.

He adds that the use of single engine taxiing on this flight saved some 40kg of fuel, which if it was applied across the entire Air France network would save some 2,500 tonnes of fuel a year.