Airbus, Kawasaki to explore potential of hydrogen fuel in Japan

Airbus and Kawasaki Heavy Industries will explore the development of a hydrogen fuel ecosystem in Japan.

The two companies signed a Memorandum of Understanding in Tokyo to explore aspects of the hydrogen supply chain such as production, delivery to airports, and then transfer to hydrogen-powered aircraft. 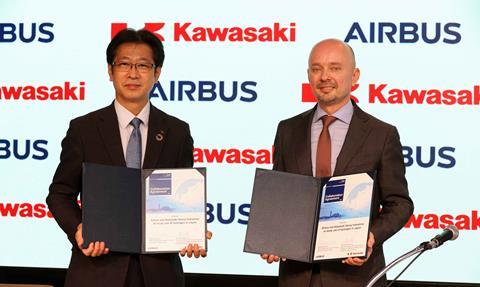 The pact was signed by Stéphane Ginoux, head of North Asia region for Airbus and president of Airbus Japan, and Motohiko Nishimura, executive officer and deputy general manager of the Japanese company’s Hydrogen Strategy Division.

The pair aim to develop “a roadmap to address challenges and define an advocacy plan on hydrogen aviaton needs.”

A key focus will be on what they refer to as “Airport Hydrogen Hubs.”

“This partnership will obviously accelerate and promote efforts by the Japanese government to achieve a carbon-neutral, decarbonised society from overall aircraft operations in 2050. We strongly believe that the use of hydrogen – both in synthetic fuels and as a primary power source for commercial aircraft - has the potential to significantly reduce aviation’s climate impact.”

Airbus advocates hydrogen as a clean aviation fuel, and has entered agreements with a number of parties across the Asia-Pacific to explore the challenges and opportunities afforded by hydrogen technology.

“Hydrogen is a clean energy that emits no CO2 and is suitable as sustainable aviation fuel,” adds Kawasaki’s Nishimura.

“We have specialised in the development of infrastructure for liquefaction, transportation, storage and transport to receiving terminals, contributing to the construction and expansion of supply chains for the hydrogen market. We are confident that our technology will connect the hydrogen production and consumption areas, creating a new road called Hydrogen Road.”

The Japan MOU will see Airbus provide details of aircraft energy use and other areas of expertise, while Kawasaki will provide information about costs and technology for the development of a hydrogen supply chain, as well as deployment scenarios for various airports.