Asia-Pacific yet to fully embrace challenges around advanced air mobility

It will be some years before urban air mobility (UAM) and commercial drones are commonplace in the cities of the Asia-Pacific, with progress patchy among countries.

In addition to different regulatory approaches among nations, with more advanced countries such as Japan, Singapore, and South Korea taking a leadership role, there remain a host of other issues to sort out, according a recent panel discussion. 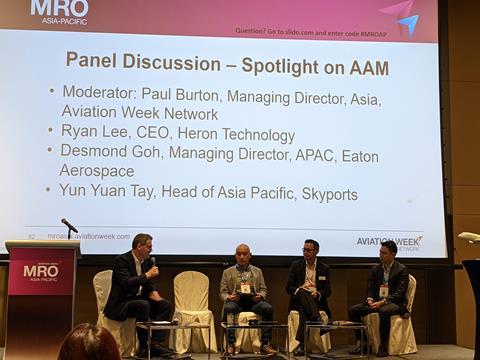 “I think [the Asia-Pacific] is quite a few steps back as compared with North America and Europe in terms of its maturity in adapting technologies, frameworks, and standards in the journey to deploy unmanned air traffic in this region, particularly Southeast Asia,” says Ryan Lee, chief executive officer of Heron Technologies, which is focusing on unmanned traffic management (UTM).

Lee observes that Singapore has been looking at UTM for nearly a decade, and a basic level of UTM service is only likely in 2023 or perhaps 2024. Regional neighbours such as Indonesia, Thailand and the Philippines have yet to even start that journey.

“So if you extrapolate into the future, I think it’s going to take 10-15 years realistically,” he says.

He notes that countries in North Asia, such as Japan and South Korea, have been putting far more resources into looking at UTM and drones.

Lee made the remarks during a panel discussion at the recent MRO Asia-Pacific event in Singapore. Joining him on the panel were Desmond Goh, the Asia-Pacific managing director for Eaton Aerospace, and Yun Yuan Tay, head of Asia Pacific for Skyports.

Goh agrees that the regulatory environment has yet to take shape, and adds that the cost of using and electric vertical take-off and landing (eVTOL) will be a big challenge, especially given the availability of other travel alternatives.

“For urban air mobility to really takeoff, it’s got to be at this competitive price point where you can easily toggle between the various substitutes,” says Goh. “That is where the [original equipment manufacturers] are being challenged to come up with a platform that’s at a competitive price point and which makes sense to the end user.” 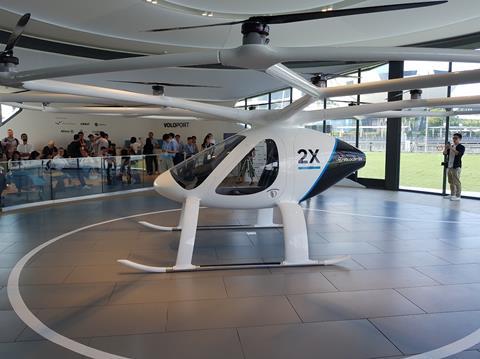 In 2019, Skyports and partner Volocopter set up a mock ‘vertiport’ in Singapore

Infrastructure is also a constraint in the region’s crowded cities.

Tay of Skyports says that it is key for governments and stakeholders to work together to create a viable UAM framework, and that this is possible in places such as Japan and Singapore where the government can facilitate different stakeholders working together.

He feels that public engagement is also essential for UAM, specifically around creating an understanding about the noise footprint of eVTOL aircraft. It will also be essential to develop a workforce for future UAM operations.

“When the industry hits maturity in ten to fifteen years that’s when the kids in school today will be passengers and potentially operators or pilots of these aircraft.”

Given that the panel took place at MRO Asia Pacific, sustainment of UAM and urban drones also came up. Unlike conventional airliners, which go through regular major checks, sometimes in distance locations, the small size and endurance of eVTOL aircraft and drones will require support more akin to ground transport vehicles such as buses and cars.

Says Eaton’s Goh: “You will definitely need localized MRO centres and perhaps shift more of the MRO work to the line maintenance side of operation.”