ATR has teamed up with Safran to develop a new diagnostics system designed to slash aircraft downtime following a hard landing to under an hour from as long as 20 working days at present.

Called “Smart Lander”, the service relies on machine learning technology and data analysis of “hundreds of thousands” of simulated incidents to issue maintenance recommendations based on how hard the landing was and the forces sustained by the landing-gear.

This will allow the manufacturer to optimise its response times to hard landing events and enable aircraft to be returned quickly to service. 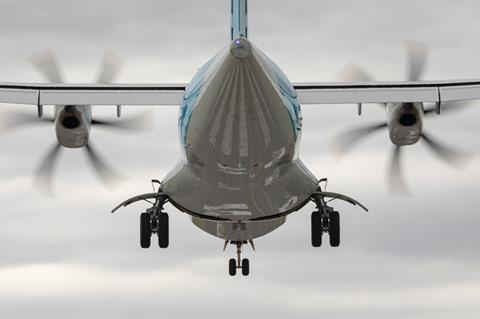 Depending on the outcome of the analysis, the twin-turboprop can either be released back into service or sent to a maintenance facility. This process can take less than an hour, says ATR.

David Brigante, senior vice-president customer support and services at the airframer says the previous process could last between 10 and 20 working days, involving both the ATR design office and Safran Landing Systems.

“With Smart Lander, we will be able to massively reduce our response times, therefore boosting aircraft availability, reducing costs for customers and enhancing customer satisfaction, while maintaining the same level of analysis quality.”