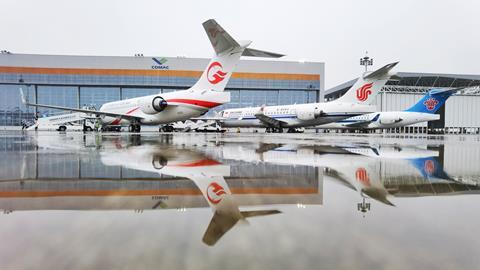 It was a sight to behold: three Comac ARJ21 regional jets, parked side by side, the liveries of China’s three largest carriers dramatically reflected on a large puddle of water.

When the ‘Big Three’ Chinese carriers - Air China, China Eastern Airlines and China Southern Airlines - each took delivery of their first ARJ21s on 28 June, Comac did not miss the opportunity to outline the significance of the moment.

“The simultaneous delivery of the three aircraft marks the official entry of the ARJ21…into the fleets of international mainstream airlines,” the Shanghai-based airframer said.

Indeed, the moment marked a significant milestone in the development of the Chinese aerospace industry and - more importantly - for the ARJ21, which holds the honour of being China’s first indigenously designed and built commercial jet aircraft.

The aircraft, which for a long while seemed relegated to the realm of smaller Chinese operators, received a fillip in August 2019 when the three carriers each placed orders for 35 examples. Air China started the ball rolling, with the other two carriers matching the orders shortly after. Each deal was worth about $1.33 billion.

The carriers rationalised the orders by saying the ARJ21 would fill a shortage of feeder capacity and also strengthen trunk routes. China Eastern added that it will use the ARJ21s in its newly-created subsidiary, OTT Airlines.

There are 32 ARJ21s in operation, nearly all of them flying with smaller, regional Chinese carriers. The largest operator of the type is Chengdu Airlines, with 19 examples flying, and a further two more jets in storage. The carrier has 10 more ARJ21s on order. 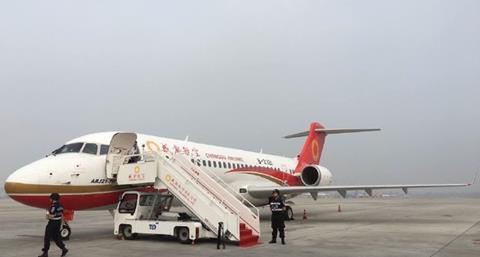 Chengdu Airlines is currently the largest operator of ARJ21s.

Other operators include Jiangxi Air, with two examples and another three on order.

Cirium fleets data indicates that Comac has an orderbook of more than 300 ARJ21s, with a further 90 on option. Most of its customers are Chinese carriers, but the Government of Congo has two on order, one of which will be in a business jet configuration.

The programme was not without its ups and downs. Work on the ARJ21 began as early as 2002, but the aircraft only had its maiden sortie in 2008, and entered service as recently as 2015. In all, the programme fell eight years behind schedule.

Several earlier aircraft that were delivered also had to be returned to Comac for modification to current production standards.

Comac, however, was always clear that the ARJ21’s development was less about being on time and more about gaining skills as it geared towards its next project, the C919 narrowbody programme.

In 2015, Comac told FlightGlobal that the final assembly of the C919 was progressing much more smoothly than on the ARJ21, evidence of the lessons picked up from creating the ARJ21. 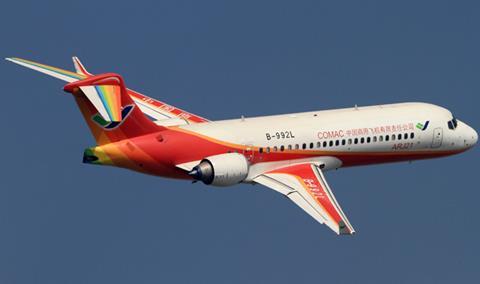 But any notion that the ARJ21 was a mere seat-warmer for the larger C919 was put to rest in the past year or so, as the C919 itself struggled to meet its deadlines. Already, Comac has shifted the C919’s service entry timeline to the right.

On the other hand, the ARJ21 began to see its production rate steadily increase, so much so that in March this year — and as the coronavirus pandemic raged on across the world — Comac opened a second ARJ21 production line, located at the Comac final assembly centre in Pudong, the same facility where C919 is assembled.

The ARJ21 had previously been assembled at the Shanghai Aircraft Manufacturing facility in Changzhong Road.

In April, after resuming production following two months’ closure during the coronavirus outbreak, Comac made its first aircraft delivery from the Pudong line: an ARJ21 to Chengdu Airlines.

Given that the passenger variant is finally making traction, it remains to be seen if Comac proceeds with other variants of the type, such as a VIP transport and a freighter. Comac has promoted such variants at air shows over the years, but its primary focus has always been the baseline passenger aircraft.

Ascend by Cirium global head of consultancy Rob Morris says the signs are looking up for the regional jet, despite its rocky beginnings.

“[Whilst] it is a fact that the programme has had a slow start…the programme is finally achieving deliveries equivalent to a production rate heading to around four aircraft per month. As the fleet in service begins to increase…Comac can begin to demonstrate a track record of programme delivery, including product support, which will allow the airlines to become increasingly confident in operation of the aircraft,” Morris tells FlightGlobal.

Concurring, Ascend by Cirium head of consultancy Asia Joanna Lu says Comac has the advantage of a strong domestic market to support the programme.

“[However],  in order to be able to leverage this advantage, [the ARJ21] programme needs to be really competitive in terms of cost, operational efficiency, [and] supporting programme, which it currently has not got,” Lu adds.