Most passengers departing to the west on London Gatwick’s runway 26 probably never give the Boeing-branded hangar to their right a second thought, assuming that the structure is just another piece of airport furniture like the control tower or terminal buildings.

Up close it is impressive: the cavernous building was designed to accommodate a pair of widebodies or five single-aisles simultaneously. Originally constructed to support the airframer’s GoldCare maintenance programme, with Norwegian as an anchor client, the facility was completed in September 2019, opening its doors later that year. 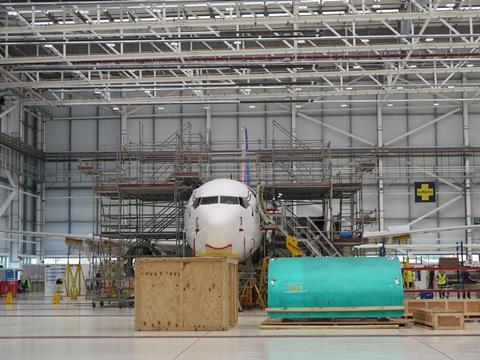 However, the coronoavirus pandemic threw those plans into disarray: as airlines stopped flying and mothballed their fleets, the need for MRO services vanished; Boeing also dropped the GoldCare programme.

“It was perfect timing for the storm that was to come,” reflects Ross Munnery, senior maintenance manager, commercial, at the facility.

In the meantime, demand for freighter aircraft had soared. Faced with these two market dynamics and sitting on a large, under-utilised hangar, erected at no little expense, Boeing switched course: in November 2021 it announced the Gatwick site would become the latest location for the conversion of 737-800s into cargo aircraft under its Boeing Converted Freighter (BCF) programme.

“Setting up a 737 line here is really, really important for us to be able to support our customers,” says Kate Schaefer, vice-president, engineering services, modifications and freighter conversions at Boeing.

Mike Dilts, 737 BCF site leader, says the Gatwick site is ideally located to serve Europe and beyond; already being part of the Boeing network “also makes the transition a lot easier”. 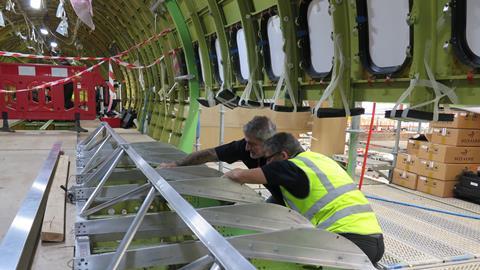 In some ways it is an outlier: many of the 13 modification centres used for the BCF process are run by third-parties as Boeing manages its investment and exposure. Indeed, of the seven lines unveiled last year, only Gatwick was in-house. But whatever the reasons behind the addition of the freighter capability, conversion – of the site, and of the first aircraft – is well under way.

Formerly operated by Fly Egypt as SU-TMI, the 2004-built narrowbody now sits on the Austrian register (OE-IBB), and is destined for Icelandic lessor Icelease, Cirium data records. Boeing aims to deliver the jet in the second half of this year, although it is being cautious on the exact timeline as staff get up to speed with the process on the first jet.

Having arrived in April, the 737-800 was, by mid-June, in the early stages of modification. Surrounded by gantries and resting on jacks, the most conspicuous change so far is the large hole that has been cut in the forward fuselage to accommodate a 3.58m (141in)-wide by 2.18m-high cargo door.

Inside the fuselage, all vestiges of its life as a passenger aircraft are gone. It has been “tube-stripped” says Dilts: the entire interior has been removed down to the bare metal. New floor beams are being installed and others reinforced; and beyond the obviouus hole in the side of the aircraft, there are also new parts being installed to support the door structure. Later on in the process, a cargo-loading system will also be added.

“As a customer when you fly this airplane away it can go straight into revenue service,” says Dilts. 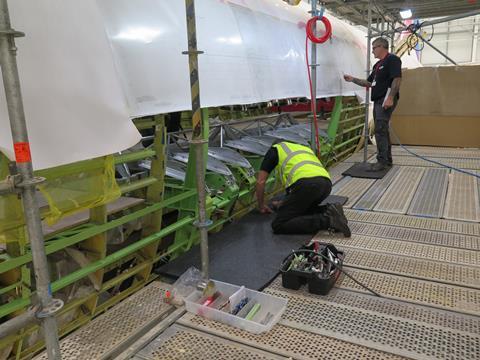 Aircraft should be delivered later this year

For staff at Gatwick, aside from the learning curve on the first jet, there is also the opportunity to analyse the whole modification process. “The aircraft is in the hangar for four-and-a-half months. We have done a lot of thinking about how we make it as efficient as possible and cut down on any wasted time,” says Munnery.

The thousands of parts required for the conversion, down to fastener level, come in a kit, he says, and the team is still learning “what we need in the right place”. The speed of the conversion should be more stable by the time the second aircraft arrives later this year.

Part of the gantry-work surrounding the jet at present is a rudimentary scaffolding tower, but Munnery says the staff working on the jet have designed a purpose-built structure which is now being manufactured. “We make sure we take input from the shop floor – we talked with our engineers about what they needed,” he says.

Some observers wonder if the current boom in air cargo, driven in part by changes to consumer behaviour during the pandemic, will be sustainable in the long run. However, Schaefer, notes that the “industry has consistently underestimated the need for air freight”.

“I don’t think we feel concerned that we are building capacity beyond what we need,” she says.

It is also worth remembering that the Gatwick site is still also a maintenance facility, offering the flexibility to refocus on MRO services should cargo demand prove more fleeting than forecast.