A four-engine, twin-tailed UAV – known as the ‘Double-tailed Scorpion’ – took off on its first flight in Sichuan province in China.

The aircraft, manufactured by state-owned Sichuan Tengden Science and Technology, flew its 18-minute maiden sortie in Fengming general aviation airport in Sichuan on 25 October, according to state media reports.

The company touts the UAV as the world’s first “large-scale four-engine, multi-purpose, medium-altitude long-endurance fixed-wing UAV”, and says its civilian uses could include in cargo and logistics, as well as aerial seeding. 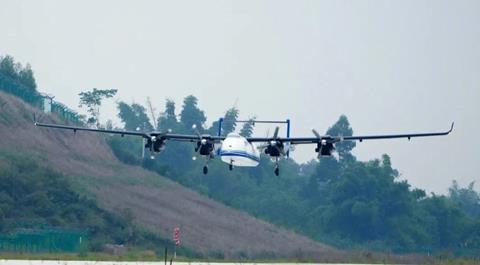 A four-engine, twin-tailed UAV, manufactured by state-owned Sichuan Tengden Science and Technology, made its first flight.

Media reports note that the use of four engines allows the UAV to perform better and fly further, allowing it to operate “multiple missions” at a time. They did not state the model of the engines, nor the UAV’s intended range.

The prototype is expected to debut at this year’s Zhuhai airshow, set to run from 8 to 13 November.

Sichuan Tengden also manufactures a military version of the UAV, known as the TB-001, a medium-altitude, long-range UAV with a maximum payload of around 1.2t. Mockups of its UAVs were on display at the 2018 edition of the Zhuhai airshow.