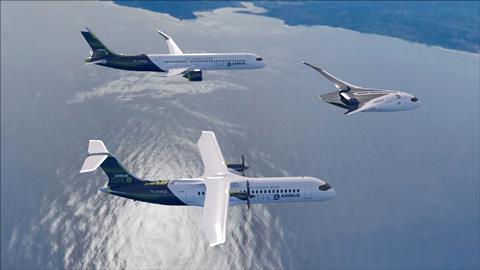 For example, a total of €182 million is available for hydrogen research, including €115 million related to direct combustion, €50 million for fuel cell-powered aircraft, €10 million for storage solutions, and €7 million for “near-term disruptive technologies”.

Total EU funding for Clean Aviation is €1.7 billion, with at least €2.4 billion to be provided by industry as “in-kind contributions”.

Projects are scheduled to last for 36 months, enabling the launch of second-phase activities in 2025.

That follow-on effort will receive 55% of the total budget and is designed to “accelerate technology maturation through integrated demonstration”, Ron van Maren, head of strategic development at Clean Aviation, told a forum launching the call for proposals on 23 March.

Not every component will need to be considered in the second phase, he says: “We need to look at things that really move the needle in terms of energy performance and aircraft performance.”

Maturity of the technologies being developed should be sufficient to enable service entry in 2035, he says.

Should hydrogen-powered aircraft be in service by the middle of the next decade, this “will be Europe’s man on the moon moment”, says van Maren.

According to Clean Aviation’s project outlines, research on direct hydrogen combustion, for example, will carry out several activities related to the topic and must “de-risk, mature, integrate and perform [a] first ground test of the propulsion system technologies (fuel injection and delivery system, combustion chamber adaptation, controls) in order to demonstrate the technology feasibility and obtain ‘key answers’,” it says.

This will include using a donor turboprop or turbofan engines for ground tests, eventually resulting in the obtaining of a permit to fly. Aircraft integration activities should also be completed in order to enable flight testing of the donor engine.

Demonstration engines should be sized to support a regional or short/short-medium-range aircraft: the turboprop should be a 5,000shp (3,670kW)-class engine, while turbofan should be in the 20,000lb-thrust (89kN) class.

Submissions are open from 25 April until 23 June, with results to be announced in September and grants awarded in December this year.

UK companies will be allowed to participate but their eligibility for EU funding hinges on the country signing up to the Horizon Europe programme as an associate country.

“If not associated, the UK entities in a consortium will be able to participate but not receive funding,” says Jane Amilhat, head of unit, directorate-general for research and innovation at the European Commission.

A total of 27 entities – a ‘who’s who’ of European aerospace companies and research bodies – are founding members of Clean Aviation, while a further 12 are associate members.

The EU has set a goal for climate-neutral aviation by 2050.

Speaking at the event the previous day, Guillaume Faury, chief executive of Airbus, reiterated his firm’s commitment to introducing a zero-emission hydrogen-powered aircraft by 2035, but pointed out the responsibility cannot fall solely on the aerospace industry.

“Aviation is the mode of transport for the future and not of the past when it comes to protecting the planet. But we will not achieve this transition alone – we need the support of many other players,” he says.