Through the partnership, the pair will offer finance and conversion packages for the retrofit of the zero-emission powertrain to existing aircraft operators. 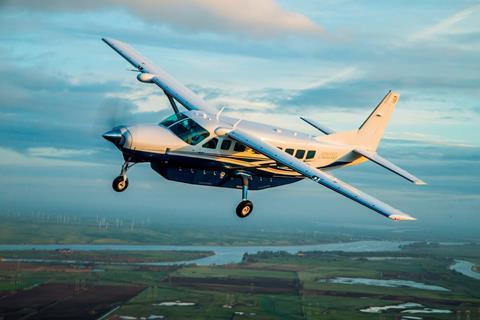 That activity is expected to begin in 2024 with the conversion of Cessna Caravans. They will use a hydrogen fuel cell system to power the cruise phase, augmented by batteries to provide a boost during the take-off and climb.

Under Dante’s plans, it will house the fuel cells and hydrogen tanks in the sub-fuselage cargo bay, with the motor and battery replacing the standard turboprop engine in the aircraft’s nose.

An all-electric version of Dante’s system, which uses batteries and a Magnix motor, is currently being tested by Australian operator Sydney Seaplanes.

Additionally, the partners will offer financing for ground infrastructure such as battery and fuel cell storage, and charging equipment.