German aerospace research centre DLR has been engaged by the country’s government to develop a concept for large-scale synthetic fuel production, including a plan for a pilot facility.

DLR says the study will be focused on electricity-based synthetic fuels, or power-to-liquid fuels, for which water electrolysis is used to produce hydrogen. Hydrogen and carbon dioxide – from the air or other sources such as biomass, cement facilities, or waste incinerators – are then used to produce fuel chemically. 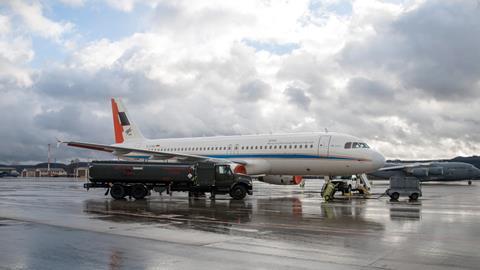 The project’s objective is to accelerate the market introduction of electricity-based carbon-neutral fuel, and explore paths to industrial-scale production of aviation and maritime fuels.

Project manager Manfred Aigner, who leads DLR’s institute of combustion technology, says that as yet there is no facility worldwide that can handle the entire production process for electricity-based fuels on an industrial scale in accordance with fuel standards.

The pilot facility will serve as a platform to further develop processes, identify key components and fine-tune “intelligently interconnected system elements” in a targeted manner, DLR says. It adds that the site will enable researchers to trial different process chains for the production.

“[Synthetic fuel] production is still time-consuming and expensive,” states DLR board member for energy and transport Karsten Lemmer. “But now is the time to act, and that’s what we’re doing with this plant.”

Partner in the project are industrial engineering company John Brown Voest and Hamburg University of Technology.

Noting a need for several million tonnes of carbon-neutral fuel by 2030, German minister of transport and digital infrastructure Andreas Scheuer states: “Electricity-based fuels are currently not yet produced in marketable quantities. That is why we commissioned DLR to work with partners from research and industry to design a production system so that we can produce the fuel economically and put it into use more quickly.”