Airbus has completed windtunnel tests of the integrated propulsion unit – the electric motor, propeller and nacelle – that will be used to power the EcoPulse hybrid demonstrator it is developing alongside Daher and Safran.

Conducted at the airframer’s Filton, UK facility, the evaluations allowed Airbus to analyse the overall performance characteristics of the propeller and the electric motor’s cooling system. 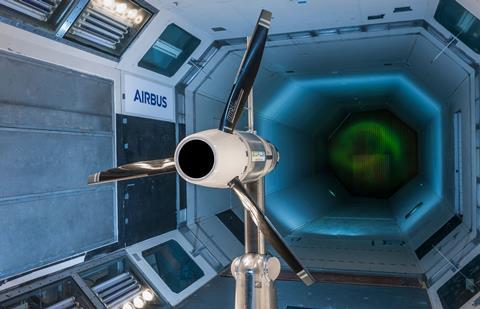 Tests were carried out at Filton site in UK

For the trials, the 50kW Safran EngineUs motor was assembled with an Airbus-built nacelle and DUC Helices propeller.

With the engine running at different speeds and power levels, measurements of the thrust and force on the propellers were taken. Additionally, the propeller wake was evaluated.

“This gave us a set of experimental data to better understand the interaction between the propeller and the wing,” says Tim Axford, head of the windtunnel facility at Airbus UK.

Engine and air temperatures were also taken to assess the effectiveness of cooling technologies, says Axford. 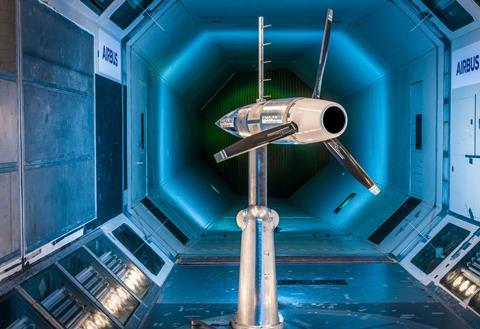 Data collected during the windtunnel tests will “allow Airbus and its partners to better estimate the power consumption of the propulsion system, and consequently the final energy performance of the aircraft demonstrator”, it says. This will feed into the development of the aircraft’s flight-control software.

Having passed the preliminary design review milestone in December 2020, the critical design review process is now under way. That should allow production of the EcoPulse demonstrator to begin later this year, ahead of ground testing in early 2022, followed by a first flight next summer.

Based on a Daher TBM airframe, the design features six electric motors on the wing, plus a conventional turboprop engine in the nose, which doubles as a turbogenerator.