The milestone comes just two months after Cleveland-based Flexjet ordered the aircraft as part of a $1.4 billion deal with Embraer. 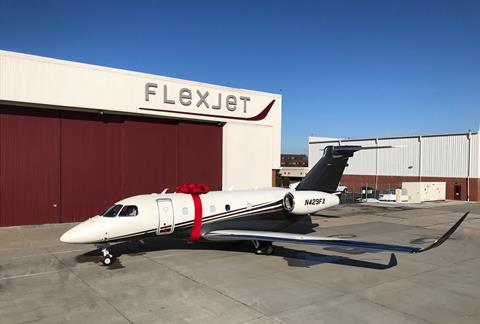 “We have long been partners with Embraer, helping to launch aircraft such as the Legacy Executive, the Phenom 300 and the Legacy 450,” Flexjet chief executive Michael Silvestro says in a media release. “Now we take the next step in that relationship, making the Praetor 500 — the most technologically advanced aircraft in its category — available to Flexjet owners first.”

Embraer launched the Praetor programme, which includes the nine-passenger 500 and 12-passenger 600, in 2018. The aircraft are upgraded variants of Embraer’s Legacy 450 and Legacy 500.

Praetors can carry more fuel than their Legacy siblings, and the new jets have Honeywell HTF7500E turbofans, which produce 500lb-thrust (2.23kN) more than the Legacy’s HTF7000s, Embraer has said.

Flexjet says the aircraft are similar enough that Legacy can be converted to Praetors.