Europe and Singapore have updated their bilateral working agreement, allowing Singapore aviation companies get speedier approval to use new and emerging technologies, such as electric-vertical take-off and landing (eVTOL) aircraft.

The European Union Aviation Safety Agency (EASA) and the Civil Aviation Authority of Singapore (CAAS) say the amendments, announced on 4 December, will allow both regulators “to collaborate on facilitating aviation innovations”, including on eVTOL aircraft technology. 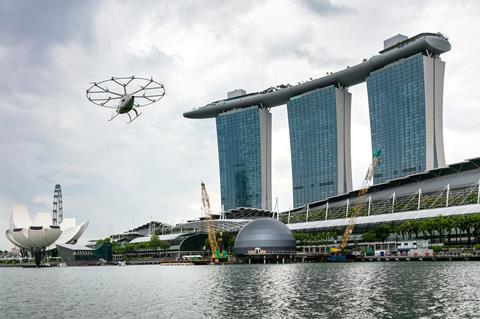 Volocopter carried out a manned test flight in downtown Singapore in 2019.

“It will help aviation companies in Singapore to innovate and benefit from rapidly developing aviation technologies,” the two agencies said in a joint statement.

EASA executive director Patrick Ky says the updated arrangement will help the industry to launch their products more quickly and easily in important markers outside of Europe, including Singapore.

CAAS director-general Kevin Shum adds that the arrangement will “help to develop Singapore as a centre of excellence for the aviation sector”.