French company Ascendance Flight Technologies has become the latest to unveil a proposed hybrid-electric aircraft design, a five-seat model intended to operate over a 400km range.

Designated the ATEA, the aircraft features a double-wing and T-tailed configuration with rotary fan elements embedded in the wing structure.

The developer says it envisions the aircraft operating urban and regional flights, and is looking to start production in 2025.

“Its architecture and design foresee the future of airborne mobility, responding to societal and environmental expectations and to the most recent certification rulings,” it adds. 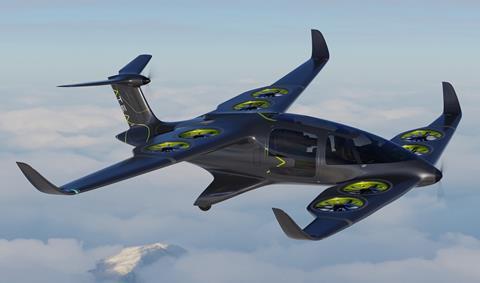 Ascendance says the aircraft will be adaptable to passenger transport, emergency services, logistics or surveillance.

The design has a tricycle undercarriage and two separate propulsion systems for vertical and horizontal flight, with eight rotors embedded in the wings and two horizontal propellers, in the nose and fin, to provide a “lift and cruise” configuration, it adds.

Ascendance’s powerplant, called ‘Sterna’, is based on a combination of combustion and electric batteries, although the combustion element will be replaced as new sustainable energy sources evolve.

It claims its “shrouded rotor” technology allows increased power during take-off and landing, but that the aircraft will generate reduced noise.

“The number of rotors guarantee manoeuvrability of the aircraft in case of failure,” it adds.

Ascendance Flight Technologies chief and co-founder Jean-Christophe Lambert says the ATEA is a “concrete reflection” of the company’s values, experience and knowledge, and the result of “huge efforts” by its research teams including tests on four initial prototypes.

“ATEA will soon exist in the form of a full-scale prototype,” he adds. The aircraft will enter a testing phase in 2023.

“With help from our financial partners we are now experiencing vigorous development,” he adds. “We are actively recruiting, running test and trial programmes and we are steadily moving towards our 2025 certification objective.”