Going nowhere fast: does supersonic air travel have a future after Aerion?

In some emerging technology markets, losing a rival might be seen as a good thing – a welcome consolidation that cuts competition for investors and early-adopter customers.

But the sudden collapse of supersonic business jet developer Aerion – the firm announced on 21 May it did not have sufficient money to continue its AS2 programme, so was shutting with immediate effect – must deeply concern other start-ups promising a new era of faster-than-sound air travel in the 2020s. 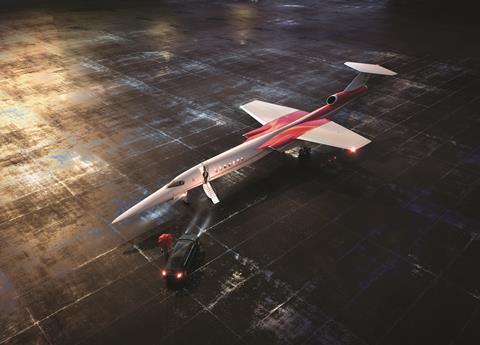 Aerion announced it was shutting down late on 21 May

It had all seemed to be going so well for the Reno, Nevada-based firm. Founded in 2003, Aerion had spent a decade seeming to do little more than attending trade conventions and talking up its concept. But with the launch of a new design, the AS2 trijet, in 2014, actual news began to replace the hype. After flirting with Airbus and Lockheed Martin, Aerion secured a strategic investment from Boeing and an exclusive agreement with GE Aviation to develop a supersonic engine, the Affinity.

A highly respected industry figure, Tom Vice, former president of Northrop Grumman’s aerospace systems division, was installed as chief executive. There were purchase commitments from the two biggest names in fractional ownership, NetJets and Flexjet, and Aerion had been lured to establish a factory and headquarters in Melbourne, Florida, from where it would start producing the AS2 in 2023, ahead of a first flight a year later.

While investors spooked by uncertainty around pandemic recovery no doubt played a part in its funding crisis, Aerion has hit trouble at a similar point to a host of other would-be disruptors, from regional airliner manufacturer Fairchild Dornier to very light jet pioneer Eclipse Aviation. Start-ups can tick along for years with little revenue on the relatively small-change benevolence of a billionaire backer – in Aerion’s case Robert Bass. It is when serious bills must be paid that cash becomes crucial.

“The closer you get to the finish line, the bigger you are, the harder the collapse,” says Richard Aboulafia, Teal Group’s vice president of analysis. He doubts that Boeing – because of its own financial issues – or a “pure-play” defence company will ride to the rescue. Despite backing Aerion for 18 years, Bass too is likely to have run out of patience. “It is unlikely he will put them back on life support now that their cash requirements have grown exponentially,” says Aboulafia.

A major problem was that Aerion’s $11 billion-plus backlog was fragile. As business personalities such as Virgin Group’s Sir Richard Branson have long understood, simply promising to be an early customer for an innovative or high-profile product secures publicity without financial or reputational risk. NetJets’ announcement in March that it had “rights to purchase” up to 20 AS2s made great headlines, but, as Aboulafia points out, “it is very unlikely that any money changed hands”.

So where does Aerion’s demise leave Boom, Spike and other market entrants? Of them all, Boom’s plans for an 80-seat airliner, the Overture, that can fly at Mach 2.2, are furthest advanced. The Denver-based company rolled out in October a single-pilot, proof-of-concept demonstrator, promising to fly the GE Aviation J85-15-powered XB-1 by the start of 2022. Boom will use lessons from the flight test programme to adapt the design the Overture, which it hopes to fly by 2026.

Like Aerion, Boom has some respected industry names on the team – former Boeing boss Phil Condit is an adviser – and at least two potential airline customers: Japan Airlines, which has paid $10 million upfront, partly in exchange for purchase rights on 20 jets, and Virgin Group, which has “pre-orders” for 10 examples. Boom too has an engine partner, although not an exclusive powerplant. Rolls-Royce has promised to look at how it could adapt its existing Trent architecture for supersonic flight. 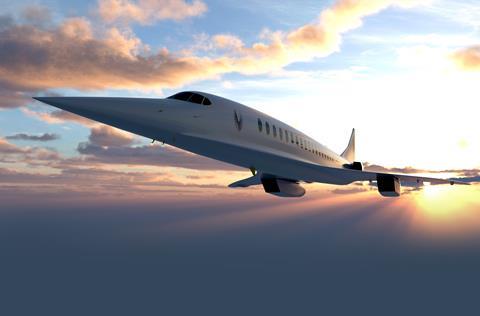 Of the other contenders, another US start-up, Spike Aerospace, has been around the longest, although it has recently repositioned its twin-engine S-512 from a business jet to a 22-seat airliner, pitched at thinner routes between business cities where there is demand for rapid, premium travel. The company plans to fly a manned demonstrator in 2022, and have the S-512 in revenue service by the end of the decade, but has not confirmed an engine supplier, nor any potential customers.

Virgin Galactic has become the latest name in the market, last year unveiling a design for a delta-wing jet capable of carrying up to 19 passengers. Two other US technology firms – Exosonic and Hermeus – as well as Boom have won funding from the US Air Force to design supersonic concepts that could be used as head-of-state transport or to redeploy missiles to forward bases at time of conflict.

With private investors or established aerospace players reluctant to bet the farm on a commercial supersonic breakthrough, it could be left to governments to throw the sector a lifeline, just as taxpayers’ money was needed to get the Aerospatiale/BAC Concorde into service with Air France and British Airways almost five decades ago. “It’s the best prospect for these programmes,” says business aviation consultant Brian Foley. “They have the deep pockets to drive this forward.”

It was something hinted at by Boom founder and chief executive Blake Scholl ahead of giving evidence to a Congressional subcommittee on aviation in March. “Supersonic flight will unlock new possibilities for human connection and for business, but this is only possible thanks to the leadership of Congress and the federal government to support emerging aviation technology,” he said, before calling on the legislature to “continue supporting this important work”.

So far, US public funding has been largely directed through NASA, with the development of the X-59, a project with Lockheed Martin to build an aircraft able to overcome the sonic boom, the main factor behind the reluctance of the Federal Aviation Administration to permit overland flights by supersonic aircraft. Lockheed is hoping to fly the X-59 Quiet Supersonic Technology demonstrator in the first half of next year.

So will the big names that have invested in supersonic keep the faith? In a statement, Boeing says its “strategic investment” in Aerion – the sum was never disclosed – was “focused on research and development of the next generation of supersonic flight”. It adds: “While we are disappointed Aerion could not secure additional funding… we remain committed to working with innovative and creative partners who, like Aerion, continue to push limits on ground-breaking technology.”

Rolls-Royce is associating itself with Boom, without seemingly committing anything in the way of risk-sharing investment. For its part, GE Aviation confirms the Affinity development has been abandoned, but insists it remains involved in the sector through the X-59, for which it supplies the F414-100 engine. “While that’s not a commercial aircraft, the programme is intended to study quieter supersonic booms and translate those findings into the commercial sector,” it says.

Aboulafia believes Aerion’s withdrawal could represent a “supersonics Big Chill”, with established players in the long-range, large-cabin business aviation segment “breathing a sigh of relief” now that the “new-start supersonic business jet threat is gone”. Dassault and Gulfstream, which have dabbled with their own faster-than-sound projects in the past, may feel vindicated in not having gone further. However, it may have convinced them that they should make a go of it themselves, he says.

Foley maintains that a key lesson from Aerion’s demise is that “these programmes move at the speed of money”. There had been hope that a SPAC [special purpose acquisition company] might emerge as a saviour for Aerion. Several of these organisations have sprung up in recent years, headed by individuals who use their reputation to attract funding with the aim of reverse-acquiring companies with promising technologies.

However, Foley believes that “we are past the apex” of SPACs targeting potentially emerging aviation sectors such as supersonics and urban air mobility. “Early indicators are that we can’t depend on them going forward,” he says. Even if an enthusiastic SPAC is out there, the scale of the investment required – around $4 billion to bring the jet to production – would be beyond the means of most of them, he suggests.

However, Foley remains optimistic supersonic air travel will happen. As a Dassault executive in the 1990s, he recalls a study that concluded a supersonic jet could be viable at 30 sales a year, or a total 300 aircraft, and believes it possible that a manufacturer with technical know-how from the military market might make a move. Much depends on devising a way of flying at faster than Mach 1 over land without the sonic boom, he says. But “the technology is moving in that direction”.