How Airbus has optimised its Beluga operation

Before Airbus introduced the A300-600 Super Transport, or BelugaST, in 1995, there was an industry aphorism that presumably resonated in Seattle: every Airbus had its first flight on a Boeing wing.

The Aero Spacelines Super Guppy, which Airbus had previously used for more than 20 years to ferry aircraft assemblies between its production sites across Europe, was based on a 1940s propliner made by Boeing – the 377 Stratocruiser. 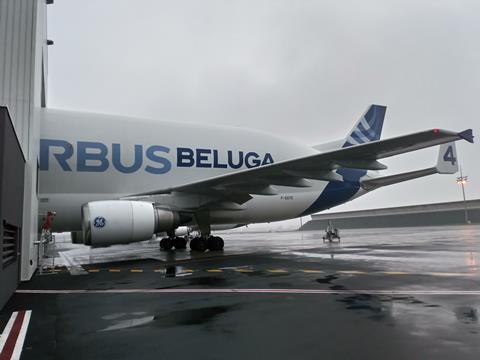 In 1997, Airbus retired the last of its four Super Guppies, although one of them still operates today for NASA in the USA. Since then, five A300-600STs have been deployed to transport airframe sections to Airbus’s assembly lines in Toulouse and Hamburg from production facilities across France, Germany, Spain and the UK.

The first BelugaXL – an A330-based replacement for the A300-600ST – entered service in January 2020. Airbus says a fourth BelugaXL, formally designated A330-700L, is currently in production in Toulouse. The airframer plans to operate six BelugaXL transports by the end of 2023, and start phasing out the A300-600ST from 2021.

While it increases its predecessor’s available payload by just 4t, to 51t, the BelugaXL provides around 30% more capacity and is capable of carrying two A350 wings, where the A330-600ST had capacity for just one. This was a primary reason for the new aircraft’s development.

Wings for Airbus’s entire commercial aircraft family, except the A220, are manufactured at its UK facility in Broughton, near Chester. The site produces complete A320-family and A380 wings, while wings for the A330 and A350 are ferried to the airframer’s site in German city Bremen for installation of high-lift systems before delivery to the final assembly line in Toulouse.

The Belugas transport airframe sections from Airbus’s facilities in France, Germany, Spain and the UK to the commercial aircraft assembly lines in Toulouse and Hamburg, and to the A400M assembly line in Seville. The furthest destination in the network is Turkish capital Ankara, where components for the A400M are picked up.

In 2019, Airbus opened in Toulouse a new facility to unload and load two Belugas at once, having previously operated out of a one-bay facility. It is the only two-bay loading dock in Airbus’s network, Tahiri points out. The airframer has established similar Beluga docks at 10 other production sites.

The docks fully enclose the Beluga’s forward section with specially adapted hangar doors to accommodate the outside transport’s fuselage shape. This enables the opening of the large cargo door and the aircraft’s loading in inclement weather. While open-air loading of a Beluga is limited to wind speeds of 25kt, Tahiri says the new dock in Toulouse can be used with wind speeds up to 42kt.

A further advantage is that Belugas can be turned around in 1h 20min, while open-air loading requires 2h 30min, Tahiri says. The aircraft can be fuelled during the loading process. 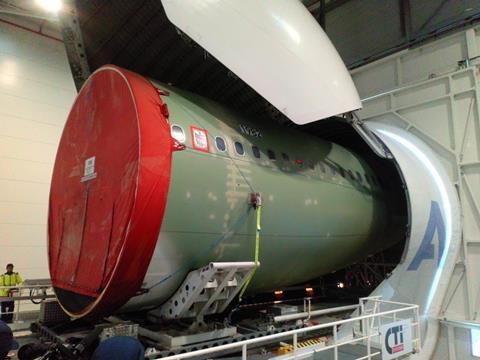 The two docks in Toulouse are each equipped with an automated roll-on/roll-off cargo system which can receive the inbound flight’s freight while shipments for the next flight are ready for loading. For loading, the aircraft is jacked up with a central jack attached just aft of the cockpit. The Beluga’s cargo deck is adjusted to the building’s fixed-height cargo ramp via a laser-based alignment procedure.

Belugas do not usually transport airframe sections from Toulouse as that site is focused on final assembly rather than component production. However, outbound Belugas from Toulouse typically carry jigs on which assemblies are delivered from other sites. Tahiri estimates that only around 5% of Beluga flights carry no cargo.

A curious procedure unfolds when a Beluga transport is pushed back for a flight. While conventional aircraft are usually pushed back by a tractor located in front of the aircraft, the Beluga’s low cockpit prevents such a manoeuvre. Instead, a tractor is driven underneath the aircraft’s belly with a tow bar which is attached to the nose landing gear’s aft side.

This analysis is written by Michael Gubisch from Toulouse, part of Cirium’s London-based reporting team