Picture a flying go-kart, with eight turbine engines – a pair on each corner, gimballed on two axes together with exhaust nozzles. That is a loose description of the Speeder, a 272kg (600lb)-payload vertical take-off and landing platform, pitched at the first-responder and military markets, that has just completed initial flight trials. 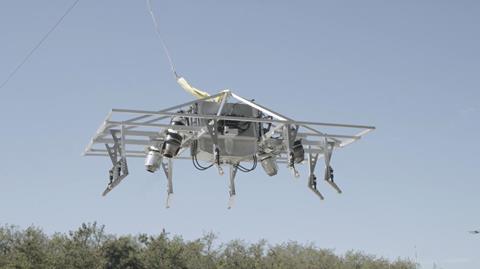 A prototype of the Speeder undergoing hover tests

The Californian start-up behind the Speeder, JetPack Aviation, began, as its name suggests, developing a prototype personal jet pack; it claims the JB10 is the only jet pack to be approved by the US Federal Aviation Administration.

The Speeder adapts the JB10’s technologies, and is different to other urban air mobility designs in that it has no rotors or lift fans, maintains founder David Mayman.

A rendering of the Speeder in production configuration

It works on a distributed turbine principle, with the nozzles pointing down to provide lift or for landing. Once at a stable hover, the engines pivot backwards to provide forward thrust. “It means there is an enormous capacity for control,” says Mayman.

JetPack Aviation says the Speeder could be deployed for urban and rural firefighting, allowing operators to reach upper floors in high-rises, or remote blazes.

An unmanned variant could also be used in combat zones to allow blood or other life-sustaining supplies to be flown to casualties or stranded units. Eventually, the Speeder could be marketed for recreational purposes.

Mayman says the Speeder’s combination of payload and ability to take-off from and land in a nine sq m area is not possible with current battery capability, whereas turbine engines are “proven, tested technology”. The aircraft will typically fly at around 1,000ft, he says.

JetPack conducted a first series of flight tests on a four-engined prototype between December 2020 and May this year, culminating in the platform hovering at 80ft (24m) with a safety tether.

It adds that building of a second prototype, with a smaller airframe, that it intends to fly without a tether, has begun, with flight testing due to begin later in the summer. A third version, P2, which will closely resemble the production model, will enter testing in the first half of next year. It will have wings that can be removed in the field, as well as forward canards, says JetPack.

The company has been offering its portable jet pack since 2016 after Mayman flew a prototype around New York’s Statue of Liberty in November 2015, and has demonstrated the device around the world.

However, Mayman says that the business, which is largely backed by himself and “Silicon Valley investors”, wanted to develop a platform that could carry a 600lb payload, but wouldn’t require “a big training overhead”. Its original jet pack had limitations in terms of weight and the amount of pilot training involved, he says: “That’s why we ended up focusing on something a little larger.”

JetPack hopes to have the Speeder in service with operators in 2023.