Kelley Aerospace has officially launched its supersonic unmanned combat air vehicle (UCAV) concept, and says it has recieved 100 “pre-orders” for the vehicle.

Known as the Arrow, the combat drone was designed and will be produced at the company’s facility in Singpaore’s Seletar Aerospace Park. Test flights of a scale prototype were conducted in Israel in 2014. 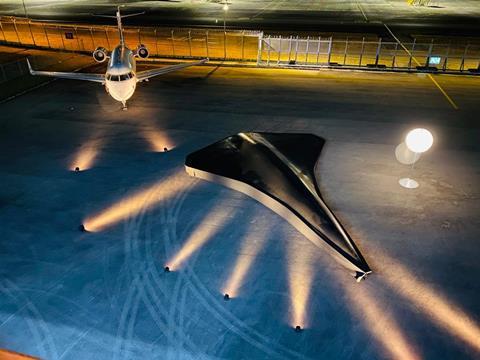 Kelley Aerospace’s combat drone concept, known as the Arrow, was launched on 25 February

Kelley Aerospace states that a manned combat aircraft can control “multiple” Arrow UCAVs, “each with a different mission… equipment [and] weapon set”. It can be launched autonomously, or be remotely controlled by two ground station controllers.

Apart from air-to-air and air-to-surface missions, the company says the Arrow can also be deployed for intelligence, surveillance, target acquisition and reconnaissance tasks.

“The Arrow is designed to complement manned aircraft and be a force multiplier in the aerial battlefield,” an information sheet on the programme states.

The company touts the “relatively low price” of the UCAV as one of its advantages – a single Arrow UCAV markets for between $9 million and $16 million. This, it adds, “allows more airframes to be purchased and yet, have a multi-role supersonic UCAV to perform high-risk missions as it does not necessarily need to return home”.

Kelley Aerospace adds that the drone’s design – a monocoque made of proprietary carbon-fibre material – is the first of its kind in the world.

“It is designed for a reduced radar cross-section and infrared signature. The carbon fibre and monocoque design endows the Arrow with outstanding strength and stiffness,” adds the company.

The Arrow UCAV programme is part of an ambitious foray by Kelley Aerospace into the supersonic arena.

At a launch event in Singapore in December 2020, the company disclosed it was also developing a supersonic business jet. Two prototypes are reporting undergoing testing in the USA and Sweden.