Raytheon Technologies now intends to cut 15,000 commercial aerospace and general corporate jobs, up from a previous estimate of 8,500 job cuts. 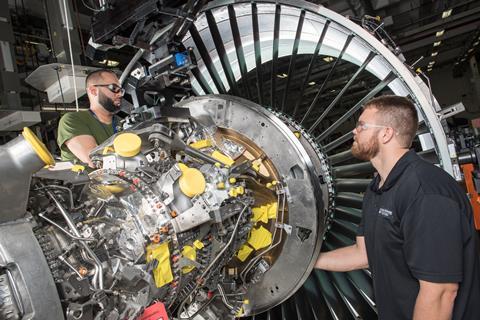 “These cost actions include the elimination of more than 15,000 positions across our commercial aerospace and corporate organisation,” says Hayes. Raytheon expects the job cuts will reduce subsidiary Pratt & Whitney’s selling, general and administrative expenses by 20%, and cut those expenses at subsidiary Collins Aerospace by 12%.

“We are not done yet looking at further ways to reduce structural costs in all of our businesses,” Hayes adds, noting that Raytheon is also eyeing its defence businesses for concessions.

The additional P&W job cuts come after P&W president Christopher Calio told Hayes about a month ago: “This is tougher than what we had thought. We are going to need to take more folks out,” Hayes says.

“We will be doing that over the course of the next few weeks,” he adds.

Hayes says one of his top priorities for Raytheon is “eliminating structural costs in our businesses, so that we emerge a stronger, higher-margin business when air traffic does recover over the next few years”.

Raytheon’s commercial aerospace business is working to eliminate about $2 billion costs this year and to save another $4 billion through cash-conservation efforts.

Broadly, cash-conservation efforts can include actions like burning down inventory to stem cash burn.

“We are just getting started on the bigger cost actions beyond the $2 billion,” says Hayes.

Raytheon has struggled through significant declines to its aftermarket businesses, on which it heavily relies.

“This is where most of the money is made,” Hayes says.

Likewise, Collins’ maintenance, repair and overhaul business declined a “little over 50%” in that period, also a marginal improvement from earlier in the year.

Similarly, the number of International Aero Engines (IAE) V2500s induced for service by P&W in the partial third quarter sank about 60%, Hayes says.

“We are only seeing about 30 shop visits a month, versus the 90 that we had seen last year.”

The company reported a second-quarter loss of $3.8 billion, down from a $2.0 billion profit in the second quarter of 2019.

Raytheon still expects “gradual” recovery of the commercial aerospace industry, “but probably not a full return to 2019 levels until somewhere around 2023”, according to Hayes.

“It really depends upon the timing of the vaccine,” he adds, noting global air traffic is down 45% globally year-on-year, an improvement from an 80% drop earlier this year.