Rolls-Royce is drawing up contingency plans for a worst-case scenario which envisions a second wave of restrictions emerging from an upsurge in the pandemic, resulting in further travel limitations this year or early in 2021.

It has outlined the impact of this “severe but plausible” scenario in its half-year briefing, citing the need to consider the “inherent uncertainty” of the pandemic disruption and the timing of recovery.

The downside outlook foresees a 64% fall in flying hours of long-haul aircraft fitted with Rolls-Royce engines this year, with a 28% rise from this level during 2021.

Sales of long-haul aircraft engines for new aircraft would drop by 48% this year, and decrease further by 47% in 2021, while sales of spare engines would be down 65% this year, with a further fall of 41% next year. 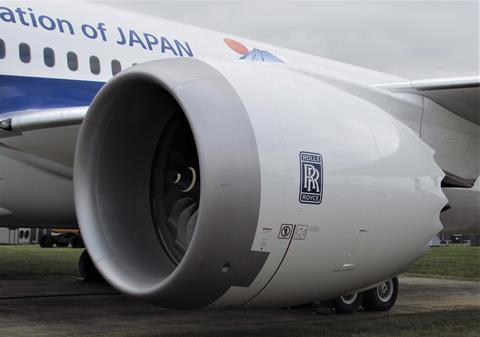 Over the first half of this year Rolls-Royce recorded “modestly higher” large-engine maintenance activity, with about 160 major service visits.

“This reflects our prior efforts to grow MRO visits as we entered 2020, as well as the natural time delay required to reduce activity,” says the manufacturer.

Under the severe-impact scenario, it says, the number of shop visits across this year would be down 16% and fall by a further 7% in 2021.

Business jet and regional aviation flying hours proved “more resilient” over the first half, the company says, but it has considered a deterioration in these sectors as well, outlining a scenario in which flying hours fall by 37% this year and increase only marginally next year.

“In the event of a severe but plausible downside scenario, modelled by the directors, the projections indicate that the group will continue to operate within its available committed borrowing facilities for the next 12 months,” says Rolls-Royce.

But if it looks further ahead, over the 18 months to the end of February 2022, the company says it would need to draw down a £1.9 billion revolving credit facility repayable in October 2021.

It says it is “assessing options” for further funding, to maintain sufficient liquidity should the worst-case scenario emerge, adding that this would probably be achieved through a combination of debt, equity and proceeds from disposals.