Safran is monitoring its entire global supply chain for signs of weakness amid the coronavirus pandemic, with the aerospace giant ready to deploy a range of remedies to help the most seriously afflicted.

Speaking on a 29 April first-quarter results call, chief executive Philippe Petitcolin said that the company had set up a “task force” to look at all its suppliers and “identify the ones that are most at risk”. 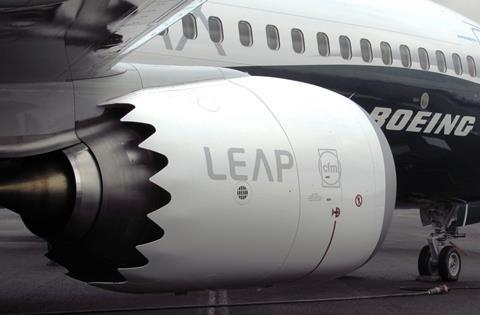 A total of 475 businesses are covered by the initiative, with 70 thought to be “at risk”. Of these, half-a-dozen are the subject of the closest attention.

“We have identified six of them which we follow on an almost daily basis,” says Petitcolin.

Problems may be an inability to re-open paused production lines, or cash-flow issues, he says. Safran has devised a range of solutions from investment options, to “pushing them for consolidation” or short-term assistance.

“We will tailor a specific action plan in order to support them,” says Petitcolin.

Safran’s own manufacturing footprint is largely fully open, he says: only 45 of approximately 250 sites globally are shut, with these mostly located in India or North America.

While its CFM International joint-venture with GE Aviation continues to produce Leap-1B engines for the Boeing 737 Max at a rate of 10 per week, chief financial officer Bernard Delpit says that Safran had to refund some pre-delivery payments in March and April on the back of order cancellations.

However, Petitcolin believes Safran’s orderbook is largely “solid”, particularly for the narrowbody sector where it has “most exposure”. He believes single-aisle orders are more likely to be deferred rather than cancelled outright.

Leap-1A production for the Airbus A320neo family – where it has a 60% market share - has been set to match the European airframer’s current 40-per-month output.

“We are in close contact with our customers and supply chain to adapt in order to have the right level pf resources to do the job – no more, no less,” says Petitcolin.

He acknowledges that if oil prices remain low then there will be less financial advantage from the lower fuel-burn offered by new-generation narrowbodies, potentially staving off some retirements.

But this will not hold true in the twin-aisle segment where “we will have a lot of A340s, A380s and 767s that will never fly again”.