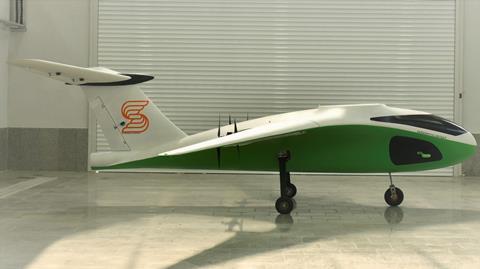 The second prototype of the eStarling

One of around a dozen electric- or hybrid electric-powered urban air mobility concepts in advanced development, the eStarling is a semi blended wing body platform that Cranfield, UK-based Samad claims will be capable of transporting seven passengers over 695nm (1,288km) at 260kt (480km/h).

The latest tests followed tethered demonstrations earlier this year, and focused on validating the flight-control system in hover mode, says Samad, which adds that the aircraft consumed just under two-thirds of its available power to take off and hover, with a “heavy power surplus for adverse weather conditions”.

Samad, which is also working on a smaller hybrid personal jet, says it is taking pre-orders for the eStarling for delivery in 2026.

The company believes the product provides a faster, more convenient, and more environmental alternative to the car, while being much cheaper to operate than a helicopter.