SpaceX’s Starship Serial Number 10 (SN10) prototype rocket landed safely under its own power after a test flight that took it to an altitude of 33,000ft.

Eight minutes later, it blew up. 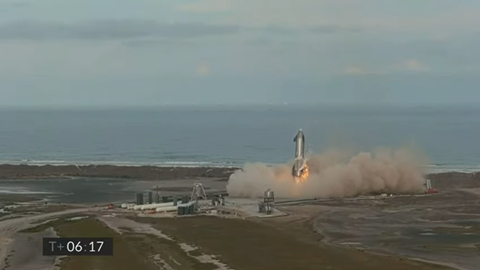 The SN10 rocket, on its second attempt, launched at about 17:15 local time on 3 March from the SpaceX facility in Boca Chica, in southern Texas.

The first launch attempt, earlier in the day, was aborted just as the craft was due to lift off after its engines showed a “slightly conservative high thrust limit” according to a tweet from SpaceX founder Elon Musk.

After a successful launch in the afternoon, it then conducted what looked to be a flawless high-altitude suborbital flight test, like its predecessors SN8 and SN9 in December and February, respectively. The vehicle climbed to an altitude of about 33,000ft before reorienting itself for re-entry and beginning what SpaceX calls “a controlled aerodynamic descent”.

But unlike its sister ships, which both exploded upon impact, SN10’s three Raptor engines reignited and slowed the craft down as it neared the ground as planned, allowing it to land upright - if tilting slightly - at the facility’s landing pad 6min 19sec later. A flame shot out from the bottom of the craft.

An explosion just a few minutes after that blew the craft off its pad and destroyed it. The cause of the explosion is as yet unclear. 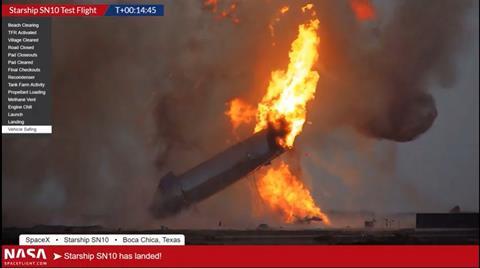 SpaceX is developing Starship with the goal of launching cargo and passengers on missions to the moon and Mars.