Supersonic anniversary will drive on developers with a need for speed

Humankind’s obsession with speed will be a certain headline topic when the 75th anniversary of the first supersonic flight arrives on 14 October.

Chuck Yeager’s historic flight in Bell’s X-1 not only broke the sound barrier by achieving Mach 1.04, but propelled him into becoming an aviation icon – a status which he merited all the way until his passing at the age of 97 in December 2020. 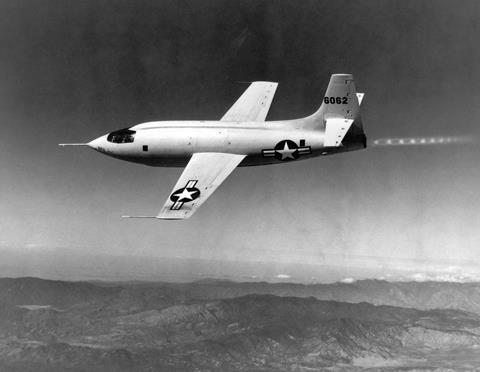 Of course, making a military aircraft travel at supersonic speed has not represented a major engineering challenge since not long after his historic achievement in the rocket-powered experimental aircraft in 1947. Just 15 years later, Lockheed flew the M3-plus A-12; a precursor to the SR-71 Blackbird. Today’s premier combat aircraft boast supercruise performance: the ability to maintain M1-plus flight without sustained use of afterburners.

With the industry’s only supersonic airliner, Concorde, having been retired in 2003, will a current push for faster-than-sound commercial air travel be able to maintain – or even gain further – momentum in 2022?

The multiple private companies now pursuing supersonic airliner or business jet designs are involved in a race to get airborne, but 2021 saw one of the most prominent players – Aerion – cease operations. The company shuttered work on its 10-passenger AS2 model following an 18-year development effort, after failing to raise the capital needed to transition its design into production.

Only time will tell whether its peer developers, which include Boom, Exosonic, Spike, and Virgin Galactic, will have greater success in converting paper commitments into the hard cash they need to turn dreams into reality.

While major carriers including Japan Airlines, United Airlines and Virgin Atlantic have all registered interest in fielding such supersonic products, will their shareholders get on board once actual money needs to be spent on such expensive projects? And of perhaps equal importance, will the travelling public be willing to pay a premium fare to journey faster, in an age when environmental considerations are becoming ever more important?

Another headline-grabbing milestone due within the coming 12 months will involve NASA’s Lockheed Martin Skunk Works-built X-59 Quiet Supersonic Technology demonstrator flying for the first time. The results of its subsequent community overflight testing missions – intended to prove the needle-nosed design’s “low-boom” acoustic qualities – should emerge around the middle of the decade.

Yeager’s breakthrough X-1 rocket ship was famously named Glamorous Glennis – perhaps 2022 will bring clarity on whether the current proponents of supersonic air travel will be able to successfully tout their products’ luxury time-saving credentials as the aviation industry embarks on a vastly more important race: towards achieving net-zero emission flight.