FlightGlobal’s annual listing of the largest 100 aerospace businesses – based on financial data from 2021 – shows an industry in recovery from Covid-19, with production of commercial aircraft on the increase.

The latest ranking of the biggest 100 aerospace businesses by revenue reflects a 12-month period of fragmented recovery – for the commercial sector at least. The 2021/2022 financial year on which we base this survey finally saw the lifting of most travel restrictions and a pent-up surge in demand for air travel. No longer grounded by border closures and stay-at-home mandates, airlines began to take delivery of and order aircraft again in serious numbers, especially narrowbodies.

The profitability of the leading aerospace companies reflects this. Last year’s survey, which was based on 2020-2021 performance – the peak of the Covid-19 crisis – showed that of the 63 businesses we have been able to calculate operating profits for, 12 made a loss, compared with 18 last time (out of 61). In the previous survey, just 19 companies saw their aerospace revenues rise year-on-year. In the latest version, 53 of the Top 100 recorded higher sales. 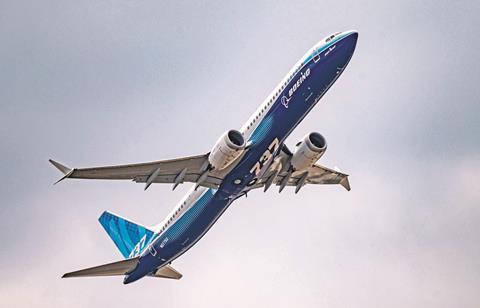 However, the year continued to bring challenges. One of these loss-making companies was Boeing, although it did reduce its deficit while increasing turnover on 2020/2021. The airframer’s problems started earlier, with the March 2019 grounding of the 737 Max after two fatal crashes in quick succession. That ban was only lifted in late 2020, and the manufacturer is still clearing “whitetails” – aircraft produced during the grounding but not delivered – from outside its plant in Renton, Washington.

The return of passenger demand – faster than many expected a year ago – has also brought its own challenges, as it comes at a time of severe shortages in raw materials, stretched global logistics availability, and a squeezed labour market. This has caused disruption in the supply chain, with engine manufacturers in particular struggling at times to source the metals, components and even skilled staff they need.

For almost as long as we have been producing the Top 100, Airbus and Boeing have vied for first place. Last year the commercial downturn saw defence firm Lockheed Martin and Raytheon Technologies, which makes around 57% of its revenues from military sales, displace them. The top four order remains the same this time, as it does for the rest of the top 10, with Northrop Grumman, Russian state holding group Rostec, GE Aviation, Safran, L3Harris and Leonardo making up the list. 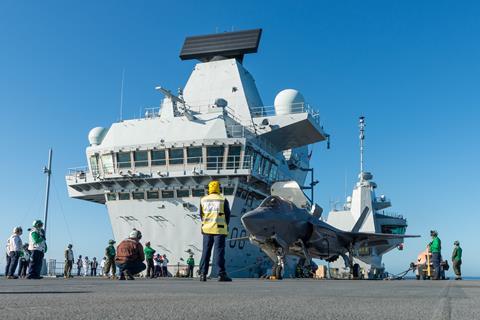 Lockheed Martin, the largest company, increased its revenues in 2021

The boost to NATO military budgets did not come until Russia’s full-scale invasion of Ukraine earlier this year. However, robust defence spending – including in the USA and Middle East – has helped protect the sales and margins of companies with a strong foothold in the sector, although the picture is mixed. Lockheed and Raytheon saw an increase in revenues, but they dipped slightly at fifth-placed Northrop and L3Harris in ninth.

The impact of supply chain disruption on tier ones with a dependence on commercial sales is also evident. Revenues fell at engine maker GE Aviation and Safran – its partner in narrowbody propulsion specialist CFM International – as well as at Rolls-Royce. German engine module specialist MTU, however, had a strong 2021/2022. Sales rose at Boeing-reliant aerostructures firm Spirit AeroSystems, although its acquisition of a Bombardier business helped. It finished the year in loss.

Business aviation manufacturers weathered 2020 better than their commercial counterparts, as private flyers continued to travel. This year, there was less of a gap. Revenues were static and profits slipped at General Dynamics Aerospace, which houses Gulfstream. Bombardier revenues were down 6.2%, although partly due to divestments. Profits fell almost three-quarters. Textron – which owns the Cessna, Beechcraft and Bell brands as well as a military aviation business – had a good year.

Following 2020’s massive Raytheon Systems and United Technologies merger, no acquisition deals significantly changed the landscape during 2021, apart from Eaton’s acquisition of Cobham Mission Systems. The divestment saw the UK company fall 19 places to 64, while Eaton rose three to 33. However, Cobham’s acquisition of Ultra Electronics, which the UK government is likely to approve, should vault it back up the rankings.

The other big industrial marriage due to complete this year, but not affecting this year’s listing, is Parker Hannifin of the USA and London-listed aircraft systems manufacturer Meggitt. We rank Parker’s aerospace business at 35, with Meggitt at 44. The combined entity would have a turnover of around $4 billion, subject to divestments and consolidation. That could take the new group into or close to the top 25.

There are three first-time entrants to this year’s Top 100, and one company that has featured before, but dropped out last year only to return. R-R divested Spain’s ITP Aero in September 2021 to a consortium led by Bain Capital Private Equity. Ranked 57, the business, established by the UK aero engine manufacturer and Sener in 1989 to support Spain’s contribution to the Eurofighter programme, is a risk-sharing partner on a number of major engines.

Another newcomer, ranked 94, is Ontic. Although focused on aftermarket distribution, the UK-based firm is very much a manufacturer. It purchases the rights to legacy component lines from their original brand owner, taking over existing stocks and continuing to produce the parts to demand. Since CVC Capital Partners bought the company from BBA in January 2020, Ontic has grown by acquiring a number of product lines.

Montana Aerospace, in 98th place, has over the past decade developed from a raw material extrusion supplier to a highly vertically integrated player in aerospace. Its acquisition in April 2022 of Belgium’s Asco, which has featured in previous Top 100s, and was previously a target of Spirit AeroSystems, makes the Swiss company a fully-fledged tier one aerostructures supplier, and should move it further up the rankings in next year’s survey.

Turkey’s Tusas Engine Industries has previously been in the Top 100, but fell out last year. It comes back in in 97th place with revenues of $338 million. Companies that appeared last year, but have dropped out are Japanese cabins and seating specialist Jamco, diverse industrial company ITT, and Longview Aviation, which is responsible for the De Havilland Canada Dash 8-400 turboprop, formerly made by Bombardier, as well as the smaller DHC-6 Twin Otter.

Last time, 58 companies posted sales over $1 billion – a significant fall on the pre-pandemic number, which had hovered in the mid-60s for years. In the 2020/2021 analysis, the threshold for the billion-dollar club remains roughly the same, with 59th placed Teledyne Technologies the lowest ranked business with 10-figure revenues. Total revenues for the Top 100 remain well below the pre-2020 era.

Lockheed’s $67 billion figure is two thirds of the $100 billion-plus that Boeing recorded in 2019.

Similarly, to make it into the top 20 this time required a turnover of roughly $5.5 billion, slightly higher than in the 2021 survey, but short of the $7 billion required for the pre-pandemic 2019/2020 financial year. Similarly, German seating manufacturer Recaro anchors this year’s ranking with revenues of $318 million. Last time, UK defence technology outfit Qinetiq brought up the rear on a $289 million turnover.

Last year, with a faltering recovery underway at time of publication, we predicted that the return to 2019 revenues and profitability would take some time and be bumpy. So it has proven. However, with Airbus and Boeing looking to aggressively ramp up narrowbody production, the market for long-haul travel now picking up again, and geopolitical tensions prompting many countries to reassess their defence spending, the signs look promising for the industry. 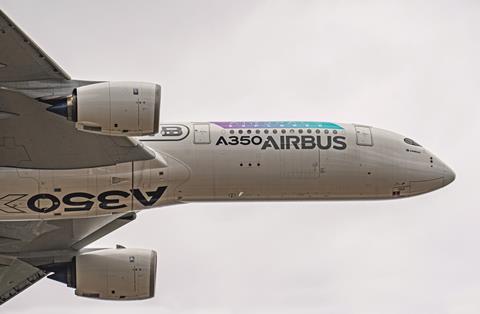 Airbus remains the third-largest aerospace business in the latest ranking

Balanced against that must be concerns about inflation and faltering growth that might by the end of this year tip the global economy into recession. That would have an impact both on demand for air travel and government budgets. In addition, there is the scenario few want to consider – a vaccine-evading variant of the Covid-19 virus that leads to further restrictions on movement. For those hoping to steer a smooth course to full recovery, there are still plenty of storm clouds ahead.