The freshly signed US-China trade agreement could benefit Boeing and the broader US aerospace sector in the next 24 months, with Beijing committed to buying $77.7 billion worth of US manufactured goods during a two-year period.

The “phase one” pact, aimed at settling two years of trade tensions between the world’s superpowers, was signed by US President Donald Trump and Chinese vice premier Liu He at the White House. 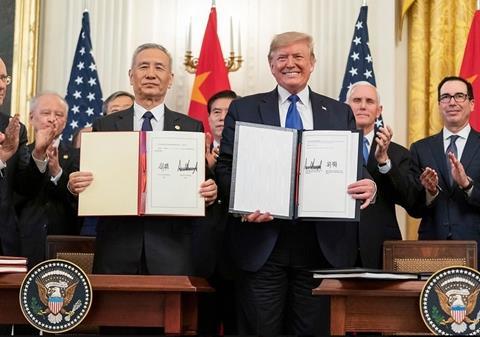 US president Donald Trump and Chinese vice premier Liu He signed the trade agreement at the White House on 15 January.

The pact, effective immediately, calls for China to purchase a total of $200 billion in US goods above the 2017 baseline, and includes $77.7 million in manufactured goods. Of the eight categories listed under manufactured goods, one is for aircraft orders and deliveries. Two other categories are relevant to US aerospace sector: industrial machinery and electrical equipment and machinery.

In year one Beijing is on the hook or $32.9 billion in manufactured goods, and in year two $44.8 billion.

Cirium’s head of consultancy for Asia Joanna Lu points out that the agreement is vague in regard to how much will go to aircraft, and that it’s not clear whether the document calls for firm orders or not. She adds that that while the agreement is billed as “measurable and enforcable”, it will take considerable effort to ensure China fully implements it.

Boeing’s last high profile China order occurred in November 2017, when the China Aviation Supplies Company signed a deal for 300 Boeing aircraft during a Trump visit to the country.

The agreement included “orders and commitments” for 300 single-aisle and twin-aisle aircraft, said Boeing at the time. Signed in the presence of Trump and Chinese president Xi Jinping, it was valued at more than $37 billion at list prices.

The Civil Aviation Administration of China was also the first major global regulator to ground the 737 Max last March after two crashes of the type.