Elaine Chao, who heads the powerful US Department of Transportation, has said she will resign, a day after pro-Trump rioters stormed the US Capitol building in Washington, DC, leaving destruction and chaos in their wake.

Chao is married to the Republican leader of the Senate, Mitch McConnell, and is the first member of the cabinet to abandon her post after a violent mob on 6 January attempted to stop the US Congress from certifying Joe Biden as the next President of the USA. The mob failed and Biden was certified as the election winner in the early hours of 7 January.

Chao served in the role under President Donald Trump for nearly four years, and her resignation will be effective 11 January. 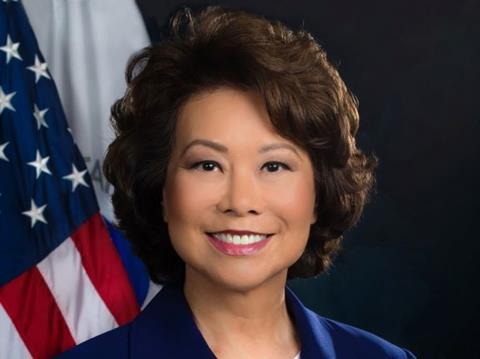 US Secretary of Transportation Elaine Chao resigns after riots

“Yesterday our country experienced a traumatic and entirely avoidable event as supporters of the President stormed the Capitol building following a rally he addressed,” she writes in a letter to DOT staff that she also posted on Twitter on 7 January. “It has deeply troubled me in a way that I simply cannot set aside.”

Chao would have had less than two weeks to serve before the transfer of power to the team of President-elect Joe Biden.

Last month, Biden nominated former presidential candidate Pete Buttigieg to be the new secretary of transportation when the new government takes office on 20 January. Buttigieg was the mayor of the Indiana city of South Bend and former intelligence officer in the US Navy Reserve.