Hybrid electric aircraft developer VoltAero is to take its Cassio I concept on an 11-city tour of France next week after demonstrating the prototype’s dual-source powertrain for the first time on 21 October.

At an event held at the company’s Royan-Medis base in southwest France, sparsely attended because of Covid restrictions, but streamed to a live audience online, VoltAero flew the adapted Cessna 337 Skymaster with the hybrid-electric unit installed in the aft fuselage, driving a five-blade pusher propeller. 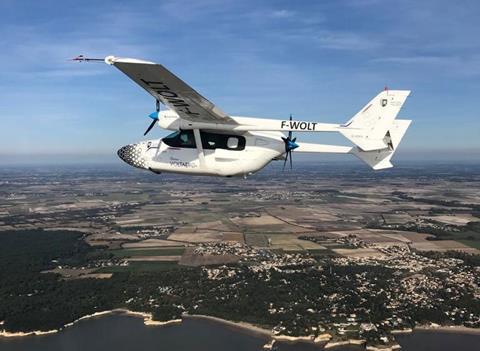 The powertrain, which will be the core of VoltAero’s planned Cassio II trio of production aircraft, combines three 60kW electric motors, that will be deployed for take-off and landing to reduce noise, together with a 276kW internal combustion engine that serves as a “range-extender”, battery recharger, and back-up.

The motors sit in what VoltAero calls a “barrel configuration”, ahead of the Nissan combustion engine, with both attached to a common propeller shaft.

The same configuration will be sufficient to provide 600kW to power the 10-seat Cassio 600, the largest of the family VoltAero hopes to be producing by early 2023, says the French start-up.

The testbed aircraft, which made its maiden flight on 11 October, retains two wing-mounted Safran ENGINeUS 45 electric motors, which replace the nose-mounted engine in the original Skymaster. However, the production aircraft will be a single-pusher, with a high tail on a twin boom, and two canards.

Jean Botti, VoltAero’s co-founder and chief executive and former chief technical officer with Airbus, says the five-day tour of France is intended to show “the capability of what electric aviation can do”.

VoltAero plans to produce around 30 aircraft in the first year and 90 the following year, before reaching a “cruise production speed” of 150 units annually, says Botti.

The tour will depart from Vannes in Brittany and stop at Tours, Le Havre, Toussus-le-Noble near Paris, Troyes, Dijon, Annecy, Aix, Nimes and Toulouse, before finishing in Angouleme.