If you think aviation had a rough 2020, consider the conference and exhibitions industry. A sector based entirely on face-to-face gatherings and social networking was shuttered in March around the world and, with rare exceptions, remained so for the rest of the year.

From the beleaguered exhibition organisers themselves to the ranks of workers who transport, construct and disassemble these instant communities, and the hotels and restaurants that depend on travelling, free-spending delegates, the effect on jobs and local economies has been catastrophic.

So too on the industries for whom the convention calendar is the schedule around which many companies plan their marketing activities – including aerospace.

When the Singapore air show took place in early February 2020, Covid-19 was already spreading from China into parts of Southeast Asia and beyond. The show went on – albeit with depleted exhibitor and visitor numbers – but others did not. Starting with the annual Aircraft Interiors Expo (AIX) in Hamburg in late March, every significant event since was postponed or cancelled, including July’s Farnborough air show, and now Paris in June 2021. 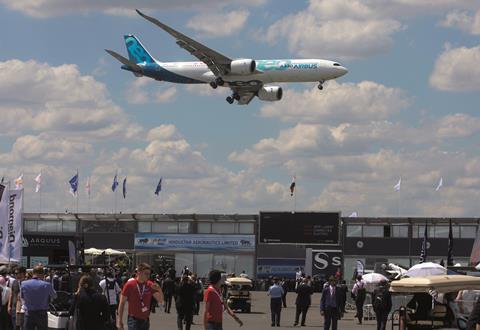 Industry will not return to Le Bourget until 2023

With cases still rising in many parts of the world, and before news broke about promising vaccine developments, concerned organisers had already begun moving shows scheduled for the first half of 2021, with AIX shifting to September and Australia’s Avalon now taking place at the end of the year, rather than February.

The EBACE business aviation convention in May also looks vulnerable and GIFAS, the French trade association behind the world’s biggest air show, announced that Paris was being cancelled outright, with the next iteration not taking place until June 2023.

Planned events from mid-2021 include the Moscow MAKS air show, scheduled to run from 20-25 July, and the Dubai air show and Airshow Australia, both of which should be staged in November.

A very 2020 phenomenon emerged – the virtual air show or convention. Farnborough and the National Business Aviation Association were among those in the aerospace sector to pioneer digital events comprising webinars and opportunities to visit “exhibitors”. For many professionals largely confined to home offices and unable to travel, they proved a welcome diversion. Few would suggest, however, that they are anything but a poor substitute for the real thing. Even high-tech companies such as Apple prefer the drama and buzz of launching products at face-to-face events.

Whether we spend most of 2021 continuing to network with our peers over Zoom, or return to shaking hands in a meeting room and looking customers in the eye, “kicking the tyres” of new technology on the exhibition floor, and relaxing with industry colleagues over a beer or coffee hangs on the availability and effectiveness of vaccines, aided by the onset of rapid testing.

Few in a global industry relish the prospect of a new normal based on tele-conferences. However, with few signs of the virus in retreat at the end of 2020, it is difficult to see a change to the status quo before mid-year at the earliest.