Will the crisis be a catalyst to invigorate European ATM reform?

While most of impacts of the global pandemic have been to shake the foundations the airline industry relies upon, beleaguered carriers and airports will be hoping it could help a fresh push to progress the stalled Single European Sky (SES) programme.

Although all players have recognised the significant role implementing SES could have in improving the efficiency of the airline industry in Europe – and with it the impact of the region’s carriers on climate change – finding the political will to make it happen has proved another matter altogether. 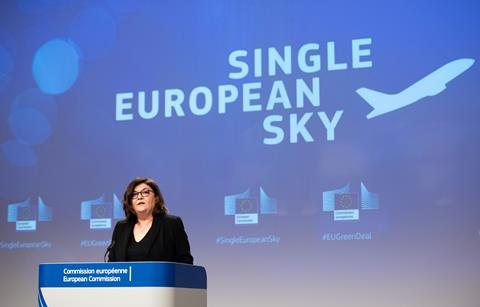 Notably a Commission effort to push the programme forward with fresh proposals in 2013 aimed at tackling the lack of progress was ultimately itself also mired in political deadlock.

European transport commissioner Adina Valean has launched a fresh attempt to invigorate air traffic reform in Europe, proposing an upgrade to the SES regulatory framework to accelerate implementation. This has ambitions to cut the region’s air transport emissions by 10%.

“[This] proposal to revise the Single European Sky will not only help cut aviation emissions by up to 10% from a better management of flight paths, but also stimulate digital innovation by opening up the market for data services in the sector,” Valean said in launching the proposals in late September. “With the new proposed rules we help our aviation sector advancing on the dual green and digital transitions.”

WHAT IS THE COMMISSION PROPOSING?

Notable changes in the fresh Commission proposals from those put forward in 2013 are that charges will be based on environmental footprint, a move away from functional airspace blocks (FABs) and a new European-wide regulator – integrated into EASA – overseeing the system-wide performance planning and review of air navigation service providers (ANSPs).

The move to base charges on the environmental footprint is a key to incentivise the use of the most efficient routes, which, in turn, will heighten pressure on more expensive ANSPs to reduce fees.

The push to FABs was intended to improve efficiency by re-organising air traffic control responsibility to focus on traffic flows rather than territorial borders. But the proposals would end the mandatory use of these blocks.

“Experience and assessment of the functioning of FABs since they were first set up in 2009 has made clear that the FABs have failed to address the problem of airspace fragmentation, which was their original objective,” the Commission says. The blocks may continue, though, if states consider them useful.

”Better network management, combined with effective economic regulation, is expected to incentivise co-operation within the network,” the Commission states.

Moving from a mandatory “vertical unbundling of support services for ATM” to a voluntary decoupling of en-route air traffic services from other air navigation services is aimed at speeding reform and transparency.

“The air traffic service providers will decide whether to procure those other services under market conditions. If they do, these procured services will not be subject to economic regulation,” it says.

Significantly, it notes: “Providers can therefore decide to continue providing all the services in an integrated manner, but cannot prevent other providers from offering competing services.”

The Commission says this will be made possible by making operational data available to other providers at a low cost, enabling cross-border data services and competition on a European market for data service provision.

WHY IS THE TIMING SIGNIFICANT?

The timing of the move is significant, as several factors provide some reason to believe efforts to progress SES could achieve more traction than in the past.

One factor is the UK’s leaving the European Union, which appears to remove one of the political obstacles to progress. The row between Spain and the UK around the status of Gibraltar airport has for many years been a blocker in efforts to secure political support for SES.

It also comes as the Commission embarks on its European Green Deal, a wide-ranging initiative outlined last December and which identified SES as one of the key ways to combat aviation emissions.

And crucially it comes after European summers at opposite ends of the demand spectrum. Two years ago a capacity crunch, and related congestion and delays, showed a European system struggling to keep up with demand. Yet this summer, amid the global pandemic, the industry has had to deal with the biggest sustained fall in air traffic in its history.

Notably, a by-product of that diminished traffic environment is that this summer has already delivered significant flightpath efficiency improvements both en-route and at congested airports.

“Air traffic management in Europe needs to be reformed to cope both with sustained air traffic growth over the last decade and with significant unforeseen traffic variations such as the one caused by the Covid-19 pandemic,” the Commission says, in a background document explaining the need for action.

”This requires changes allowing operations to take place under the safest, most cost- and flight-efficient and environmentally friendly conditions.

”This implies de-fragmenting the European airspace, reducing delays, increasing safety standards and flight efficiency to reduce the aviation environmental footprint, and regulating charges related to monopolistic service provision. In this context, close civil-military collaboration, at national and EU levels, is necessary for the implementation of the Single European Sky,” the Commission says.

The pandemic – and the bleak assessment on how long air travel will take to recover – means for the first time the European system is facing a traffic rather than a capacity crisis. Given that ever-increasing traffic has been the one of the principal ways in way ANSPs in Europe have managed to lower their unit costs in recent years, ANSPs and the wider industry must now adjust to new realities.

”ANSPs are faced with the challenge to adjust activities and related costs in response to the crisis – also to support the future recovery of the air transport sector – while at the same time ensuring that future air traffic growth does not create another delay crisis like the one experienced before the current crisis caused by the Covid-19 pandemic,” the Commission notes.

“This ultimately shows the need for transforming the way air navigation services are provided so that changes in demand can improve and be accommodated in a more flexible way.”

HOW MUCH HAVE AIR NAVIGATION REVENUES FALLEN?

While the shortfall in airline revenues has been clear – and in many cases prompted governments to step in to prop up carriers through the crisis – the collapse in traffic is being felt across the industry.

This makes one of the challenges ensuring the required modernisation and investment in the European air traffic management system still happens, given the major revenue loss ANSPs face as a result of reduced flying.

While the heaviest revenues reductions were incurred during the initial lockdown in the second quarter – down across each month by more than $1.7 billion – they remained $1.5 billion down in August despite higher levels of flying.

More than half that lost revenue across the year so far – just under $5 billion – comes from Europe, led by reduced revenues in France, Germany and Russia. Indeed, six of the 10 Flight Information Regions with the biggest shortfall in revenues this year so far are in Europe.

As flight activity has stalled – or if anything moved backwards since August – and with seemingly no solid testing regime or medical breakthrough imminent, the shortfall of revenues raised from navigation charges will continue to mount. That makes even deeper the challenge of recovering these revenues and cutting costs accordingly.

WHAT HAS THE REACTION BEEN?

Tackling that revenue shortfall is certain to involve action around costs, and unions have already sounded the alarm.

The European Transport Workers Federation (ETF) argues the proposals “ignore countless issues” facing air traffic management and instead focus on reducing costs of ATM services and aiming to bring competition into the sector.

”The new proposal totally misses what the real issues of the sector are and what we will be facing in the coming years,” says ETF ATM committee chair Charles-Andre Quesnel.

”With the current Commission’s approach, we are condemned to repeat the same mistakes of the past. We will see the Single European Sky initiative fail again because there won’t be enough trained and skilled staff to secure stable and continuous air navigation services in the near future.”

Meanwhile. European airline body Airlines for Europe (A4E) says the crisis provides an opportunity for aviation to ”build back better” and to prepare an ”outdated air traffic management system” for a return to increasing traffic levels in the future.

”We particularly welcome its clear focus on SES efficiency gains to benefit the environment, which will help our airlines meet Green Deal goals. In our view, however, full implementation of the SES must include an enhanced governance structure, with airlines – the primary customers of Europe’s ATM system – at the heart of a collaborative decision-making process.

”We now need to assess whether our recommendations for a digital transformation of the sector and a clear governance structure are adequately reflected in the updated proposal. Only this would ensure it is ‘future-proof’,” it says.

”A reformed legislative framework will help ANSPs to provide the increased capacity and scalability required in the future by our customers, the airspace users, and to offer more environmentally efficient flight trajectories,” the body says.

Noting the wide-ranging nature of the proposals, it says it will now examine these further so as to form detailed positions.

Indications of the response of European ministers to the proposals are set to become clearer after an ”informal exchange” hosted by the German presidency on 8 October.