The aircraft, which is powered by four locally-produced Dongan WJ-6 turboprops, first performed the water-drop at the opening day of the show, releasing over 9,000kg (19,800lb) of water. 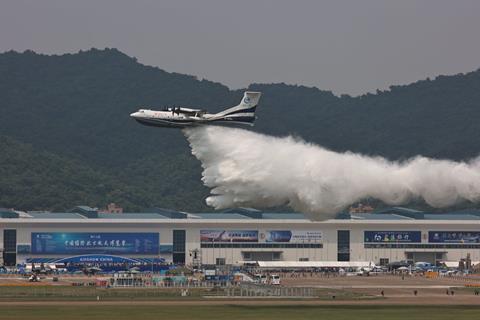 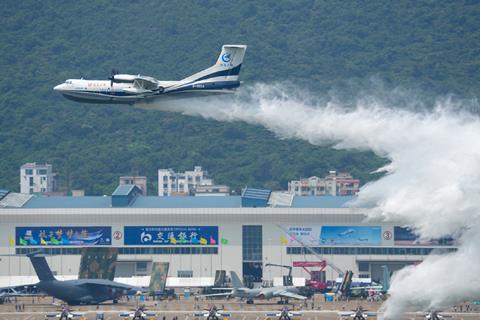 The AG600 performed an aerial waterdrop during the Airshow China in Zhuhai.

According to Airshow China’s schedules, the AG600 will be involved in three flying displays across the five days of the show.

The AG600, which had its maiden test flight in 2017, is expected to undertake a range of missions, and its target market is domestic parapublic organisations. Its main functions are search and rescue and transport, but it can also serve as a water bomber.

AVIC officials at the show were cited by state media as saying that the water-dropping performance “fully displayed” the firefighting capabilities of the AG600. The 9,000kg of water dropped was also the most amount released since water-dropping tests began.

In March, it was reported that Avic was due to commence testing for the type’s firefighting capabilities. It follows a series of test flights over sea, which commenced in April 2020.