Airbus is fully-booked for outsize freight operations with its A300-600ST Beluga aircraft this year, following its decision to market the type’s high-capacity transport capabilities to third parties.

The airframer has opted to establish a spin-off carrier, Airbus Beluga Transport, to take advantage of the outsize capabilities of the Beluga fleet given the -600ST’s retirement from Airbus’s internal logistics service.

Airbus Services business development and strategy manager Reza Fazlollahi, speaking to FlightGlobal during the ILA air show in Berlin, said he was “impressed” by the number of requests, from a variety of customers, for the Beluga.

Fazlollahi says the company has “several missions planned” with helicopters as well as work with Airbus’s defence and space division. He foresees 80-90% of the business for the Beluga being ad hoc flights.

The Ukrainian conflict, the destruction of the sole Antonov An-225 and a reduction in Russian-operated An-124 availability, have all put additional pressure on the high-capacity sector.

Military aircraft services sales director, training, Andreas Oeffner stresses that Airbus is not marketing the Beluga as a direct competitor to the An-124.

He says the Beluga is not made for tactical transport – deploying resources to a specific location – but rather strategic transport, the long-distance carriage of particular cargo. The aircraft is being tested on routes to such countries as Japan, Singapore, Brazil and the USA.

Its volume enables customers to move two large helicopters, or engines the size of the General Electric GE9X, without the need to dismantle them. Oeffner says the removal of the dismantling requirement is a “game-changer”, and particularly appealing to the military.

Helicopters, vehicles and engines can be anchored to modular, multi-purpose pallets before being loaded on the Beluga. Loading is achieved either with a separate outboard platform able to lift 35t, or an on-board cargo loader with 20t capacity that travels with the aircraft – although the on-board option necessitates a reduction of space and payload. 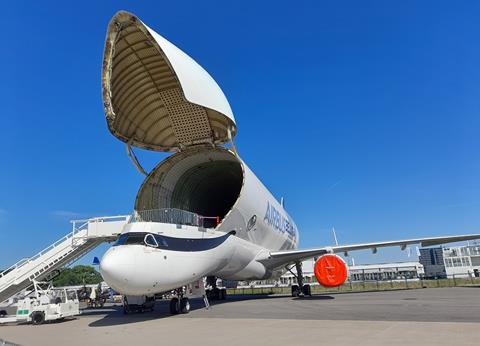 Airbus is promoting the Beluga’s availability at ILA, although it is displaying the larger A330-700L BelugaXL variant at the show. The BelugaXL is the Beluga’s successor, but Airbus aims to make the larger aircraft available for third-party transport, in specific cases, from the second quarter of next year.

Six BelugaXLs will ultimately make up the internal logistics fleet for Airbus, while the spin-off carrier – which will receive its air operator’s certificate in mid-2023 – will pick up the five -600ST Belugas. The second Beluga is likely to be introduced to third-party service at the end of this year.

Fazlollahi says the expansion of the combined Beluga and BelugaXL fleet will mean recruiting and training additional pilots for the specialised type.

Airbus will need to obtain approval for the Beluga to transport different types of cargo, but the airframer aims to secure a Class E certification around mid-2024 – with the fitting of certain equipment including smoke detectors – which will give it greater freedom, including the ability to handle dangerous goods.