Chinese regulators have certificated the Embraer 190-E2, with the approval process for the larger E195-E2 also under way.

Embraer announced the certification from the Civil Aviation Administration of China at the Zhuhai air show on 10 November. It expects validation for the E195-E2 – which was displayed at the event – to “follow shortly”. 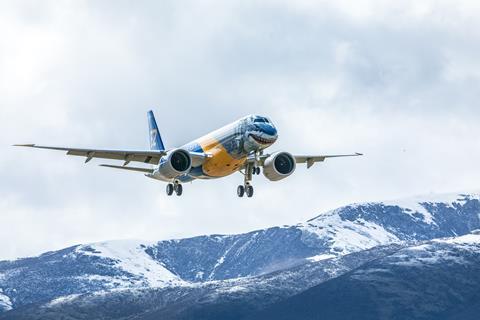 E190-E2 has previously operated into Yushu airport in western China

The Brazilian airframer sees a requirement in China for up to 1,445 new aircraft in the up to 150-seat category over the next 20 years.

In addition, the hot-and-high performance of the twinjets is an ideal fit for the country’s geography.

“It’s the first aircraft in its class to have flown to some of the world highest airports in western China including Lasha and Yushu,” says Guo Qing, managing director and vice-president for commercial aviation, Embraer China

“We believe the E190-E2 is the best aircraft to serve low density but high elevation markets in western China with the right performance, more profitability.”

However, Embraer has yet to register any orders from Chinese airlines for the jets, which are both powered by Pratt & Whitney PW1900G engines.

Its only Chinese customer for the E195-E2 is lessor ICBC, which has a firm order for 10 aircraft. To date, five have been delivered and are operated on lease by KLM Cityhopper, Cirium fleets data shows.