Can aviation get the carbon out of flying? For short flights in small, personal aircraft, battery power and electric motors certainly work - Airbus’s one-man E-Fan crossed the Channel as long ago as 2015 - but while the subsequent half-decade has seen dozens of companies experiment with battery power to chase the dream of zero-emission urban air taxis, none has yet entered service.

Commercial aviation’s higher power requirements also demand a different strategy. Airbus and Rolls-Royce appeared to have opted for a series hybrid solution when they launched the E-Fan X demonstrator programme in late 2017, backed by backed up by Siemens (whose electric power division was subsequently acquired by R-R).

The plan was to mature the technologies required for hybrid propulsion by modifying a BAE Systems Avro RJ100 regional jet, replacing one of its four Honeywell gas turbines with a 2MW electric fan motor powered by batteries charged by an inboard AE 2100 gas turbine. Originally set for flight testing this year, come April and the project was cancelled altogether. 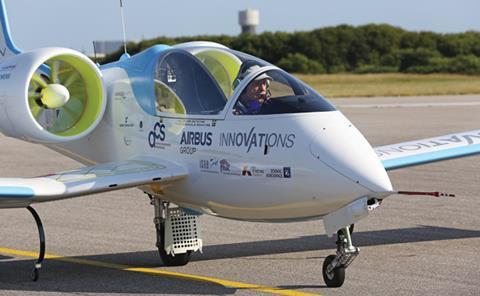 At the time, both Airbus and Rolls-Royce were already reeling from the Covid-19 shutdown of aviation, so it was no surprise to hear both sides citing costs among other reasons. As R-R chief technology officer Paul Stein put it then, much had already been learned from the project but “flight testing would have cost tens of millions and we have both decided that we would prefer to save that money.”

The hard truth appears to be more fundamental than even money. As Airbus zero emissions technology vice-president Glenn Llewellyn told a 25 June webinar titled “Path to clean aviation in a new world”, while E-Fan X illuminated some interesting technologies that will someday be used in commercial aircraft: “As a combination in a serial hybrid-electric configuration it was not giving us the disruptive - and I really mean disruptive - level of [emissions] reductions that we need to make over the next years.”

Llewellyn could perhaps be forgiven despair, but sees a solution: hydrogen.

Hydrogen can be burnt directly in an engine or feed an electricity-producing fuel cell, in either mode emitting only water vapour. Hydrogen can be used to make synthetic fuels, it is well-understood because it is already widely used in the chemical industry, has been extensively researched as an automotive fuel and is a mainstay propellant in space rockets, where combining liquid hydrogen and liquid oxygen delivers massive thrust. And, of course, it is wildly abundant - seawater, after all, is H2O. Hydrogen, reckons Llewellyn, could yield half of the carbon dioxide (CO2) reduction needed; as a fuel, it as a fuel, it could even significantly reduce other greenhouse gases of aviation like persistent contrails and NOx. Both of which require further research to understand fully their climate impact and ultimately to confirm these can be significantly reduced or eliminated with hydrogen. The fuel should even scale up and eventually be able to power the large aircraft familiar to Airbus.

Ultimately, hydrogen as a prospective solution leaves the outside observer wondering why aviation has ever been interested in batteries. Of course, as with any technology shift there is much devil in the practical detail, and Llewellyn readily cites challenges of weight, reliability and infrastructure, which is a massive issue at airports. Safety is another big concern, and he underscores the need to develop a system that is at least as safe as using kerosene on and around aircraft.

But on balance, he says: “It looks like there are ways to make hydrogen really feasible for commercial aircraft applications.”

This enthusiasm is echoed by Jean-Francois Brouckaert, chief research officer at the EU’s Clean Sky technology development programme. Brouckaert points to a Clean Sky hydrogen study published on 22 June which concludes: “[Hydrogen will] play a key role in transforming aviation into a zero-carbon, climate-neutral system over the next few decades. Novel and disruptive aircraft, aero-engine and systems innovations in combination with hydrogen technologies can help to reduce the global warming effect of flying by 50% to 90%.” 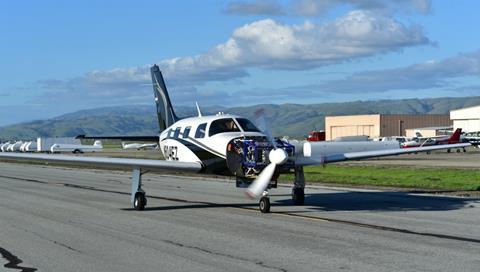 One innovator already well down the hydrogen path is Val Miftakhov, founder and chief executive of ZeroAvia, and organiser of the webinar. ZeroAvia has made headlines in its native California and the UK by test flying a six-seat Piper M350 converted to run on tanked gaseous hydrogen feeding a fuel cell which drives an electric motor.

Miftakhov describes ZeroAvia as a powertrain company and is bullish about the programme. Hydrogen fuel, he believes, can achieve not only zero emissions but also be cost-competitive with kerosene for small aircraft as soon as 2023, when he hopes to have his system in service on a 10- to 20-seater; talks are underway with operators of aircraft like the Beechcraft King Air, Cessna Caravan or Viking Air Twin Otter.

The ZeroAvia plan, he says, is to convert such aircraft without touching controls or avionics, to minimise certification issues. Bigger aircraft could, he believes, be flying cost competitively on hydrogen by the end of this decade, and his own technology development roadmap stretches to 200-seaters around 2040.

For all sizes of aircraft, a critical performance parameter is range - which needs to be 500 miles, says Miftakhov; he is aiming to showcase as much as 300 miles with the Piper demonstrator this year. In California, 500-mile-range aircraft could serve the state from hubs at Los Angeles and Sacramento; a similar coverage in the UK would suggest London and Edinburgh.

With sufficient range - which could be greatly extended with liquid rather than gaseous hydrogen, to pack more energy into a tank - there would be no need for fuelling infrastructure, ideally including local hydrogen production, other than at the hubs. As Miftakhov observes, that relative simplicity means hydrogen can work for aviation where it has never been attractive as a fuel for road vehicles, which rely on thousands of fuel stations spread across the road network.

Miftakhov is confident that technical, financial and regulatory hurdles can be overcome to achieve zero emission hydrogen aviation: “The good news is, the problem is tractable.”

But if hydrogen is a theme for seekers of zero-emission flying, so is urgency. As Brouckaert observes, there needs to be enough research and development money now to have new, green, large aircraft, and a fuelling infrastructure, ready for service from 2035: “It will take many years just to replace the fleet, because it takes a number of years to produce the aircraft.” Any later and, given the service life of commercial aircraft, we will miss the widely-held 2050 target for net-zero aviation.

That urgency was palpable on 2 July, when Fatih Birol, head of the International Energy Agency, presented the IEA’s “Energy Technology Perspectives” special report. IEA researchers looked at the market readiness and maturity of 400 energy technologies and the result, says Birol, “is not very optimistic”. From 400, they identified just four with the greatest potential to reduce carbon emissions: better batteries, biofuels, carbon capture and storage - and hydrogen.

The appeal of a clean hydrogen economy has been obvious for decades, but always meets the show-stopping question: where will all the hydrogen come from? Virtually all hydrogen in industrial use today is generated by combustion of fossil fuels. Electrolysis can split water into its constituent elements, but to no climate change advantage if the requisite electricity is generated by fossil fuels. Meanwhile, observes Birol, fossil fuels’ share of global energy consumption has held steady at about 80% for 30 years, despite the growth of wind and solar electricity generation.

Says the IEA report, decarbonising big emitters - shipping, road transportation, aviation and heavy industries like steel, cement and chemicals - will “largely require the development of new technologies that are not currently in commercial use. The innovation process… can be long, and success is not guaranteed. It took decades for solar panels and batteries to reach the stage they are at now. Time is in even shorter supply now.”

Birol notes that despite the rhetoric about tackling climate change, government research budgets have been level for a decade. Likewise from companies, “we are not getting encouraging news”; the Covid-19 crisis may lead to reductions in corporate R&D spending.

IEA analysis, says Birol, “tells us that if we don’t make major, major efforts in terms of clean energy technologies, to reach our climate targets will be all but impossible.” His assessment of various governments’ efforts to set a path towards climate survival could equally apply to aviation bodies, regulators and companies: “Setting ambitious climate goals [is] courageous…but realising them requires more than courage.”