Sustainable aviation fuel (SAF) producer LanzaJet is “just around the corner” from bringing the cost of its fuel down to match that of regular jet fuel, according to the firm’s chief executive.

Uptake of SAF has been hampered by the small volumes produced and the price differential versus regular kerosene-based jet fuel. 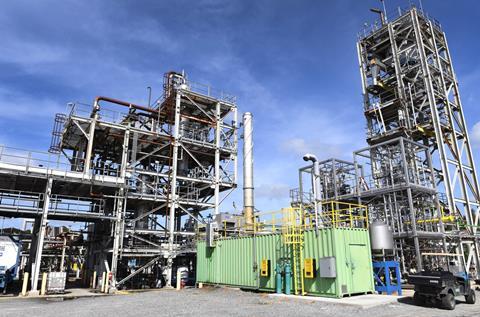 But Jimmy Samartzis, chief executive of US-based LanzaJet, says its fuel is “not far from being at parity today” with what he calls “fossil jet”.

Samartzis, speaking at the Royal Aeronautical Society’s Cutting Aviation’s Climate Change Impact conference on 20 October, said that a number of new SAF production technologies, including its own ethanol-to-fuel process, were assisting with the price shift.

LanzaJet’s first facility in Georgia, USA is due to come on stream next year with an annual production capacity of 10 million gallons. Even though this is “not a large quantity” it will be “relatively well priced” against regular jet fuel, he says.

As more and larger plants begin production, costs will be driven down further, Samartzis adds; under the company’s current plans it will be manufacturing more than 175 million gallons of SAF per year by 2025.

Its biggest cost is the ethanol feedstock required, he says, and provided that can be “accessed inexpensively” – including from part owner LanzaTech – it can create a “much less expensive SAF product”.

LanzaJet has three early-stage development projects in the UK, part funded by the government under its Green Fuels, Green Skies programme.

The three schemes all involve British Airways – which is also an investor in LanzaJet - with Virgin Atlantic also taking part in two of them. Should the projects all come to fruition, then they will be capable of producing a combined 300 million gallons of SAF per year. 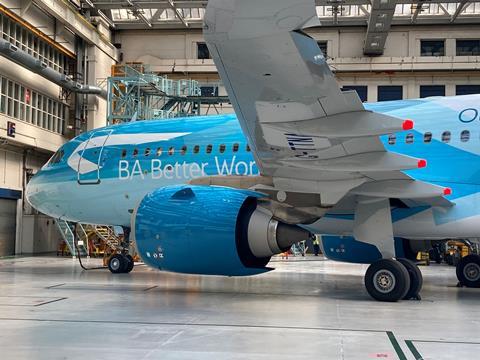 British Airways has invested in LanzaJet

In the USA, the Biden administration has proposed a tax credit for SAF blenders as a part of its “aviation climate action plan”, while the EU and the UK are both proposing usage mandates.

Samartzis does not favour one approach over the other, noting that while “mandates can be helpful” they need to be “combined with other policies” to encourage industry development.

The UK government on 19 October announced £180 million ($248 million) in support the development of SAF plants in the country as part of its Net Zero strategy document.

Speaking at the conference, Emma Gilthorpe, chief executive of the Jet Zero Council – the public-private body tasked with developing policies to cut aviation’s emissions – described the move as a “good step” but said that more needed to be done.

“The £180 million will hopefully give us the resources to start to pump prime SAF plant creation,” she says.

However, additional incentives are required to stimulate the industry she says, including the creation of “an environment for investors” which requires “clear policies and a stable pricing environment”.

In addition, the investment community could be reassured if systems already employed in the renewable energy industry to protect against price volatility, such as the government’s Contracts for Difference scheme, can brought across to support SAF production, she argues.

Gilthorpe also cautions that the UK’s sometimes lengthy process to approve planning applications could delay the construction of new facilities. “They should be seen as a means of industrial regeneration and jobs,” she says.