The in-development CR929, jointly developed by China and Russia, is reportedly still on track to take off in 2025, as both countries look to begin construction of the first test aircraft next year.

According to a commentary published on Chinese news site Sina, China’s Comac and Russia’s United Aircraft “have reached an agreement” on design details of the widebody, and that the project “is still in progress”. 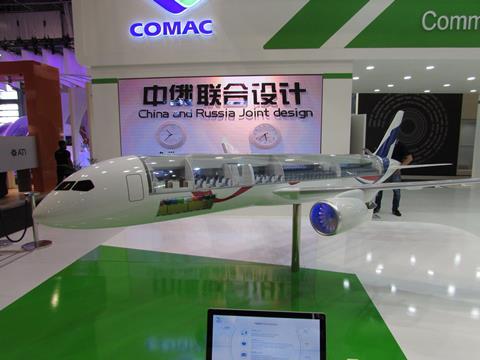 China and Russia are jointly developing the CR929

The article, dated 2 September, also lists research and development and other “after-sales” investments to amount to around $20 billion.

It adds that construction of the first prototype is expected to commence in 2022, but did not elaborate further.

According to the article, the CR929’s first flight is slated for 2025 at the earliest, with “mass production” of the jet three years later. It also discloses a target of 100 aircraft delivered by 2045.

There have been no launch customers for the aircraft — seen mainly as China’s way of breaking the widebody duopoly held by Boeing and Airbus — though Comac told FlightGlobal in 2019 that discussions with existing customers were ongoing.

FlightGlobal has reached out to Comac and United Aircraft for comment on the latest development.

Both airframers have been coy about progress with the widebody. In July 2020 reports emerged about “difficulties” between Beijing and Moscow about the programme.

Among these was the division of responsibilities: Comac wants exclusive rights to sell the CR929 to the Chinese market, a larger, faster-growing market than Russia, which has since called for “compromise” over the matter.

The Sina article reiterated the call for compromise, noting that despite the differences, the project has not stagnated.

It notes that while the cost of developing a widebody might be new to Comac, whose only in-service type is the ARJ21 regional jet, it will allow the Chinese airframer to capture around 10% of the global widebody market share.

While the cost of developing a widebody aircraft programme is hefty, the commentary notes that such aircraft “occupy…an important position” in the global aviation industry.