A Dutch court has delivered guilty verdicts against three men for the downing of Malaysia Airlines flight MH17 with a surface-to-air missile over eastern Ukraine in 2014, killing all 298 people on board the Boeing 777.

Life sentences were handed down to all three men – Ukrainian Leonid Kharchenko, and Russian nationals Igor Girkin and Sergey Dubinskiy, for their part in the aircraft’s destruction and the murder of its 283 passengers and 15 crew. 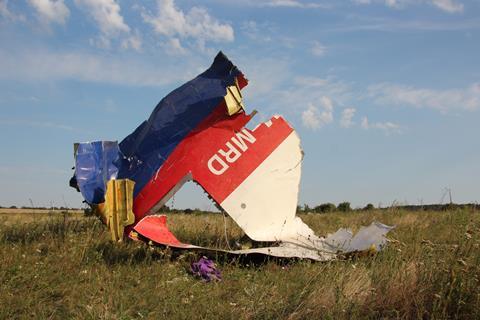 Malaysia Airlines flight MH17 was downed over eastern Ukraine in 2014

Investigators had previously concluded that a Buk surface-to-air missile was fired at the 777-200ER (9M-MRD) as it transited the conflict area over the Donetsk region on 17 July 2014 where Russian-backed rebels were attempting to form a breakaway republic.

The Buk launcher system had been transported from Russia into the conflict zone and pressed into service with armed militia from the self-styled Donetsk People’s Republic (DPR). The court found that the missile was fired from farmland outside the village of Pervomaiskyi, an area under separatist control.

None of the men was responsible for launching the missile at MH17 – which was likely targeted in the mistaken belief it was a Ukrainian military aircraft – but bore responsibility for arranging for the Buk system to be transported to the conflict zone and then deployed.

It says the Buk was “brought to Ukraine at the initiative of the accused Dubinskiy, as commanding officer within the DPR”. He was “directly in charge of organising and directing the transport of the [system] to and from the launch site”.

Kharchenko also “had a direct and active role as executive commander” and ensured that the Buk was accompanied during its journey from Russia and “guarded and protected at the ultimate launch site”.

“These active contributions on his part were so important for firing the Buk missile, that Dubinskiy and Kharchenko worked closely and deliberately as co-perpetrators together and with the crew of the Buk in the downing of Flight MH17,” its verdict says.

Girkin, meanwhile, was the “highest DPR military leader in operational terms and as such bore (final) responsibility for deployment of military resources in and for the DPR”, the court ruled.

“He also actively endeavoured to make the Buk used on 17 July 2014 disappear as quickly as possible, rather than condemning its use.

“Because of his role, he is held to be responsible for causing the crash of Flight MH17 and the murders of the 298 persons on board,” it says.

The court has ordered the arrest of the three men. Russia continues to deny any involvement in the downing of MH17, or exerting any influence in that conflict with Ukraine.

A third Russian citizen, Oleg Pulatov, was found not guilty.