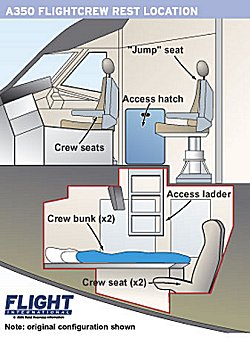 Airbus has completed a new round of improvements to the A350’s specification, which has helped International Lease Finance (ILFC) overcome its concerns with the new twinjet and place orders. The changes include a reprofiled forward fuselage to improve the lower-deck flightcrew rest area, as well as a slight increase in cruise speed.

The US lessor announced a deal at last month’s Dubai air show for 12 firm orders, plus eight options, as well as its expected order for 20 Boeing 787s. The suddeness of the A350 deal was a surprise given ILFC chairman and chief executive Steven Udvar-Hazy’s recent comment that he felt Airbus had more work to do on the A350 design, specifically concerning the cabin and the weight-reduction effort.

Speaking at the Dubai air show, ILFC president John Pluger said that the lessor was satisfied with changes introduced with the latest A350 design update. “There’s a ‘November 1st’ A350 configuration which has addressed our concerns,” he said. “Cruise speed was one issue and they have increased this [by 0.01] to Mach 0.83.”

It is understood that the speed increase has been partly achieved by the reprofiling of the A350’s nose section. However, Airbus says that this change was driven primarily by the need to increase the volume of the flightcrew rest zone, which to free up revenue space will be relocated from the main deck to beneath the cockpit, in what was previously the avionics bay.

Airbus had hoped that the space now occupied by the avionics bay would be suitable for the crew rest area. However, according to industry sources, pilots had voiced their concerns that it was too cramped, which has necessitated a reprofiling of the A350’s nose to enlarge the bay. The original design is shown above.

Airbus is understood to have employed BMW to design a radical new cabin for the A350 along the lines of the 787’s. A cabin mock-up is expected to be completed early next year at the manufacturer’s marketing centre in Toulouse.